In the first broadcast, Kaiser Kuo, currently host of the highly influential Sinica Podcast and former spokesperson for Baidu China, looks at the 1,000 people who shape China's image in the Anglophone world and, who therefore have a significant impact on how the West views China. He points out that this group of individuals have profound ideological, historical and political beliefs which can lead them sometimes unconsciously to distort the real image of China.
Matthias Niedenführ, co-founder of ThinkIN China and vice-director of CCT comments on Kaiser‘s presentation. 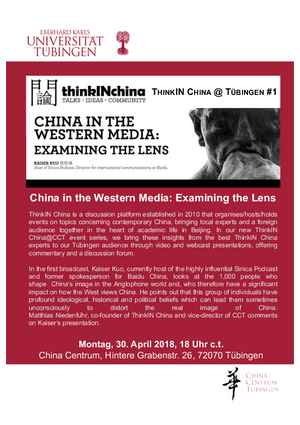 Kaiser Kuo is a Chinese American freelance writer, rock musician and commentator on technology and politics living in Beijing. Currently he works as director for international communications for Chinese search engine Baidu. His monthly column in Beijing’s premiere English-language magazine, The Beijinger, has run for ten years (2001-2011), and an anthology of columns titled Ich Bin Ein Beijinger was published in June 2009. In 2010 Kaiser started the Sinica show, a current affairs podcast based in Beijing that invites prominent China journalists and China-watchers to participate in uncensored discussions about Chinese political and economic affairs.