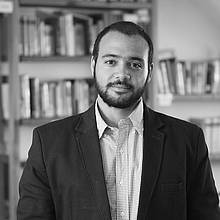 Ahmed Maati has been affiliated with the department of political science in Tübingen since 2012; he worked for the joint research group “Arab Youth: From Engagement to Inclusion” at our partner institution: the American university in Cairo. He has offered both M.A and B.A level courses on political Islam and comparative politics in the MENA. Ahmed Maati is since August 2017 a Research Associate of Professor Schlumberger at the chair of “Middle East and Comparative Politics”. He concluded his M.A. degree in Comparative and Middle East Politics and Society (CMEPS) in 2015 with a research focus on identity conflicts, statehood, and democratization. His M.A. thesis is titled “State identity, democratization, and the democratic deficit in the Muslim world”.

25. International Congress of DAVO, Deutsche Arbeitsgemeinschaft Vorderer Orient, Hamburg, Germany, Panel: Digital Authoritarianism: Tools and Types of Authoritarian Rule in the Digital Age. Role: Presenter and Chair. Paper: “They are always watching you”: The Relevance of Surveillance Technology to the Study of Authoritarianism

Research assistant and field researcher at the American University in Cairo for the international research project “Arab Youth – From Engagement to Inclusion?” (funded by VolkswagenStiftung).