Phase III: Current collaborative research of INRA PACA and the University, both Avignon, France, and Eberhard Karls University, Tübingen, Germany, on the heat tolerance and selective pressure of heat on the land snail Theba pisana in view of global warming 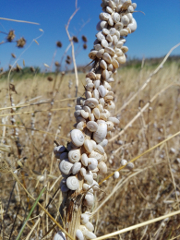 Mediterranean land snails such as Theba pisana display a large variation of shell colouration, ranging from plain white morphs to differently pigmented individuals, banded in varying intensity. There is long debate on possible disadvantages of darker individuals in intensely illuminated habitats, particularly as these snails tend to climb vertical objects resulting in exposure to direct sunlight. Even though the emission coefficient of a given object largely depends on its material, darker shells theoretically should absorb solar radiation slightly more intensely than white ones even though pigmentation in some banded snails is rather faint. However, the ecophysiological and microevolutionary significance of such theory remains largely unclear, as pigmented individuals have persisted also in hot climates.

In view of earth´s decreasing albedo with global change, INRA PACA and Tübingen University address this subject in a collaborative multidisciplinary study. “The last report from the International Panel on Climate Change (IPPC, 2013) highlights the Mediterranean as one of the most vulnerable regions in the world to the impacts of global warming. The models issued by IPCC cast different scenarios for the Region, but all of them agreed on a clear trend in the pattern of some climatic parameters. In terms of the thermal regime, the base scenario from 1980-2000 was used to estimate an increase in average surface temperatures in the range of 2.2 and 5.1 °C for the period 2080-2100” (https://www.iucn.org/regions/mediterranean/our-work/climate-change-mediterranean).

In long-term field experiments, open-top chambers that simulate global warming were set up and, within them, different morphs of T. pisana compete for optimal positions to escape from the hot soil and to withstand extreme heating that results from solar radiation, thus facilitating survival. Experiments do not only include natural morphs but also artificially coloured individuals in order to reveal the general relevance of pigmentation in this context. In behavioural experiments, the capacity of different morphs to sense heating and to respond by climbing is assessed. Furthermore, high resolution thermometry allows to record and to quantify thermal changes of the shell surface and the interior of the snails´ bodies. The experiments are accompanied by biochemical analyses of heat shock protein expression and oxidative stress effects.

The current study follows a well-established long-term collaboration of the research groups around Yvan Capowiez (INRA Avignon), Christophe Mazzia, Magali Rault (both Avignon U), Rita Triebskorn and Heinz Köhler (both Tübingen U) that has resulted in a number of publications on stress ecology and ecophysiology in the past.

Phase II: The “Twinning Project” integrating biology and thermodynamics – Funded by the Ministry of Science, Research and Arts of Baden-Württemberg
The collaboration with Esslingen University of Applied Sciences addresses the question, why and how survival of terrestrial gastropods (Theba pisana, Xeropicta derbentina, Cernuella virgata) is possible in the hot climate of opencast landscapes in the Mediterranean. Furthermore, possible differences in the survival strategies of different morphotypes (bright and dark, banded and unbanded) and large adult and small juvenile individuals are investigated. Field recordings are combined with static and dynamic lab experiments, thermodynamic measurements, behavioural, physiological, and biochemical studies. The study aims at simulating the thermodynamics and the heat stress response in a virtual model which gives information to the intrinsic and external limits of survival of land snails in hot habitats.

Phase I: The Hot Snail Project using Les Mourgettes - Funded by the German Research Council (DFG: KO 1978/5-1, KO 1978/5-3)
Mediterranean helicid land snails, such as Theba pisana, Cernuella virgata, and Cernuella aginnica form ideal organisms to investigate the physiological and microevolutionary implications of adaptation to heat stress. These snails live in unsheltered habitats without any protection from sunlight but avoid extreme heat by climbing vertical objects. In response to heat, they express a series of biochemically heat-protective stress proteins (heat shock proteins, hsps) and, furthermore, vary considerably in their morphology (colour of the shell) which, on one hand, may be the result of variable hsp expression and, on the other hand, may in turn interact with the internal temperature inside the shell.
Morphological variability and thermotolerance

Even though mediterranean helicids withstand high environmental temperature in general, differences in thermotolerance exist between species or populations at different sites, e.g. from Spain, Wales, or Australia. As well, different populations also exhibit different degrees of morphological variability: some populations are formed exclusively by white phenotypes but others comprise a wide variety of white, spotted or differently striped phenotypes. It has been suspected that some darker shells become about 1°C warmer on their surface than brighter shells in the sunlight, however this has not been proven yet for these species and therefore requires closer research. Also, the resulting impact of shell heating on internal temperature in the snail's body and on thermotolerance remains to be investigated in this project.

As the darker morphs' pigmentation is caused by melanin, we additionally focus on studying possible correlations of pigmentation and antioxidative defense capacity and immune competence.
Thermotolerance and biochemical responses to stress

It is well known that all kinds of organisms respond to thermal stress with the induction of stress proteins (heat shock proteins, hsps). Quite a number of these hsps are involved in chaperoning intracellular protein to prevent or limit stress-induced protein misfolding. At a first glance, it seems reasonable, that stress-tolerant phenotypes may rely on a constitutive upregulation of hsps but it was shown that this is not always the case. As an acute response to stress, a physiological upregulation of hsp levels has been frequently reported. But animal strains which have been selected for stress resistance usually exhibit rather the contrary, a downregulation of the hsp response, possibly due to high energetic costs which trade-off against the benefits of hsp chaperoning. In this project, we investigate the kinetics of the hsp response to increasing temperature in differently thermotolerant snail populations.
Waddington´s widget: the evolution of morphological variability under stress

In the early 1940s, Waddington postulated an unknown mechanism which suppresses phenotypic variability unless organisms have been exposed to stress. During the last years, there is increasing evidence that the regulation of stress proteins (hsps) plays a crucial role in Waddington´s widget and that hsps can act as capacitors of morphological variability. Despite these insights, the role of capacitors within the process of adaptation to environmental stress is still unknown. Using populations of mediterranean helicids which exhibit different morphological variabilities, we investigate the interaction of heat-induced hsp regulation and phenotypic variability.