Disclaimer: the following reports are brief summaries of the original German texts.

The Department for Early Prehistory and Quaternary Ecology at the Institute of Prehistory, Early History and Medieval Archaeology awarded the ROMINA-Förderpreis for ice age research for the first time. This prize is generally awarded for scientific works in the field of ice age archaeology and quaternary ecology. The company Romina Quellen Mineralbrunnen from Reutlingen donates the prize money of 10 000 DM. With this prize, the Tübingen institue and Romina Quellen Mineralbrunnen want to promote ice age research and innovative ideas and discourse in the field especially amongst young and aspiring scientists.

The first winner of this award is Dr. Jacobo Weinstock-Arenovitz of the Staatliches Museum für Naturkunde in Stuttgart. A jury consisting of five people honored his dissertation "Late Pleistocene Reindeer Populations in Western and Central Europe. An osteometrical study of Rangifer tarandus". The dissertation covers the ecological and economical importance of reindeer in Europe during the time of 130 000 to 10 000 BC. Weinstock-Arenovitz focuses on the herd migrations and the different uses palaeolithic hunters made of the animals.

The ROMINA-Förderpreis for ice age research is awarded to Dr. Sandrine Costamagno for her dissertation, "Stratégies de chasse et fonctions des sites au Magdalénien dans le sud de la France", concluded in 1999. Her work deals with the hunting strategies and the function of certain sites during the Magdalénien. This time period is considered the peak of ice age hunters. Costamagno shows that there was no preference in hunting certain animals, as opposed to what researchers assumed previously.

Dr. Lynn E. Fisher is awarded the ROMINA-Förderpreis for her dissertation at the University of Michigan, studying the mobile hunter-gatherer-cultures in Southwestern Germany from 16 000 to 8000 BP. Her central question regards the adaptations of past humans to the changing climate conditions. To answer this question, Fisher examined technological developments, landscape use, raw material acquisition and general movement. The changes produced innovations such as bow and arrow.

Dr. Olaf Jöris was awarded the Tübinger Förderpreis, which is being financed by the Ulm company ratiopharm with 5000€. He is the first German scientist to receive this honor.

His dissertation deals with finds of the excavation of the site Buhlen in Nordhessen. The site is considered one of the most important Neanderthal site in the time frame of 60 000 to 90 000 BP in Central Europe. The most important artifacts from the site are backed wedge-shaped knives. Jöris showed that these artifacts were reworked over the course of their use and revised previous chronologies based on these artifacts.

Prof. Natalie Dawn Munro PhD of the University of Connecticut was awarded the fifth Förderpreis for her work on the use of animal resources at the transitional period from the last cold phase to today's warm phase. Her research on late ice age animal remains from Israeli sites provide important information on the Neolithisation, starting in the region of the Fertile Crescent.

Dr. Marie Soressi of the renowned „Institut de Préhistoire et de Géologie du Quaternaire“ of the University of Bordeaux is awarded the Förderpreis for her dissertation on the technologies for stone knapping of Neanderthals in the Moustérien de tradition aucheléenne, short MTA. The Neanderthals are among the last Neanderthals in Europe. Soressi managed to find a link between this culture and the Chatelperronien. Her work is an important contribution to the debate on cultural exchanges of Neanderthals and modern humans.

For the seventh time, the Förderpreis is awarded, this year to Dr. Nicolas Teyssandier of the Department „Préhistoire et Technologie“ des CNRS in Nanterre near Paris, one of the most renowned research establishments on Stone Age in France.

In his dissertation, Teyssandier researches the earliest Aurignacien in Europe, a complex most associated with the first anatomically modern humans in Europe. He discusses finds from western and eastern Central Europe. Teyssandier shows that the Aurignacien coexisted with other cultures in different parts of Europe.

Shara Bailey is an Assistant Professor at the Department of Anthropology of the New York Universit. She is a researcher of the renowned Center for the Study of the Human Origins. She focuses on the differenciation of different hominine species, starting 500 000 BP, specialising on differences in Neanderthal and modern human teeth.

Shara Bailey was awarded for her work regarding the question on whether Neanderthals are among our direct descendants. Independent from gnetic findings, her analyses of the teeth produced the result that they are not. Additionally, her work provides a guide to differentiate between the teeth of Neanderthals and modern humans.

Dr. Sonia Harmand of the Laboratoire de Préhistoire et Technologie am Maison de l’Archéologie et de l’Ethnologie der Université de Paris X – Nanterre received the ninth Förderpreis for her work on African Archaeology in the 1990s, focusing on the early cultural developments of hominins. She participated in and conducted numerous excavations in Kenya.

Dr. Charles P. Egeland from the Wisconsin Historical Society in Madison was awarded the tenth Förderpreis. In 2007, he concluded his dissertation at Indiana University, Bloomington. His research focused on six sites of the famous Olduvai-gorge in Tanzania. He utilises a brand-new approach, focusing on secondary changes of the sites' finds by carnivores such as hyena.

Dr. Daniela Holst was this years award winner. She is a researcher at the Museum für die Archäologie des Eiszeitalters, research area Early Stone Age of the Römisch-Germanischen Zentralmuseums Mainz. Her dissertation  ‚Subsistenz und Landschaftsnutzung im Frühmesolithikum: Nussröstplätze am Duvensee‘ examines the Mesolithic site of Duvensee and its different settlements. Three different settlements were identified. Among the most spectacular finds are the roasting places for hazelnuts.

In her analyses, Holst utilizes a broad spectrum of innovative methods, including modern technological methods such as GIS.

Dr. Johannes Krause of the Max-Planck-Institut  for evolutionary anthropology in Leipzig is awarded the twelfth Tübinger Förderpreis. He is the first geneticist to receive this award for his 2008 dissertation ‚ From genes to genomes: Applications for Multiplex PCR in Ancient DNA Research ‘. Krauses research included analysis of the genomes of mammoths, cave bears, primates, but also hominins such as modern humans and Neanderthals. The latter is a focus in his work; he was a member of the working group which decoded the full Neanderthal gene code. By this, it could be shown that the DNA-sequences of Neanderthals and modern humans diverged about 500 000 years ago.

Krause's research is highly innovative and pioneering, making him an important name in the field despite his young age.

French historian Dr. Héloïse Koehler was awarded the Förderpreis for Early Prehistory and Quaternary Ecology. She received the award for her dissertation on the Middle Palaeolithic, the European time period from 200 000 to 35 000 BP. Koehler examined finds from a Neanderthal site near Paris. She concluded that the classification of artefacts as tools highly depend on which approach the examiner takes and which criteria they use, posing questions on the reliability of past classifications of Neanderthal tools.

The Förderpreis was awarded for the 13th time.

American archaeologist Dr. Britt Marie Starkovich received the 14th annual Förderpreis for Early Prehistory and Quaternary Ecology. Starkovich from the School of Anthropology of the University of Arizona researched more than 21 000 animal bones from the Middle and Upper Palaeolithic in her dissertation „Trends in Subsistence from the Middle Paleolithic through Mesolithic at Klissoura Cave 1 (Peleponnese, Greece)“, reconstructing dietary habits of Neanderthals and anatomically modern humans and how they changed during the transitional period in the Middle Palaeolithic. As a postdoc, Starkovich plans on continuing research on human's adaptations to a changing environment in Greece and other regions of Europe.

The Förderpreis is being financed by EiszeitQuell.

The 15th annual Förderpreis for Early Prehistory and Quaternary Ecology goes to Dr. Katerina Douka of Oxford University. The award is being financed by Romina Mineralbrunnen GmbH.

Douka has specialised in C14-dating. Her dissertation “Investigating the Chronology of the Middle to Upper Paleolithic Transition in Mediterranean Europe by Improved Radiocarbon Dating of Shell Ornaments” relies on the commonly found shell ornaments which are associated with occupation of anatomically modern humans as opposed to Neanderthals.  Douka analysed the shells of 14 keysites in Lebanon, Turkey, Greece, Italy and France which are important for understanding the migration of modern humans to Europe in the transitional period between the Middle and Upper Palaeolithic. Surprisingly, Douka found that the oldest shell ornaments are from France, not the Near East, as could be expected.

Dr. Kurt Rademaker of the University of Maine was awarded this year's Tübinger Förderpreis. He received the honor for his research on Late Pleistocene routes of colonisation in the Andes. He was able to prove that humans adapted to the harsh environmental circumstances to utilise local resources. Previously, it was assumed people only settled in coast regions.

For his research Rademaker searched the Peruan mountains for months, leading to his discovery of Cuncaicha rock shelter. The shelter, which contained archaeological materials which could be dated to 12 500 BP, is located at 4800 m above sea level, making it the highest known Late Pleistocene site.

Pablos examined hundred of bones dating up to 800 000 BP, mostly from the site Sierra de Atapuerca near Burgos in the north of Spain. His work has the potential to become an important reference for all palaeoanthropologist studying evolutionary changes in the human anatomy and morphology.

He is a known specialist for zooarchaeology, an archaeological discipline focusing on animal remains. In his dissertation, Rodríguez -Hidalgo reconstructed subsistence strategies of early humans from animal remains, dating up to 400 000 BP. The remains were found at the site Sierra de Atapuerca near Burgos in the north of Spain, one of the largest known ice age sites. Rodríguez -Hidalgo 's research shows that early humans such as the homo antecessor were already hunting animals, using strategies not unlike those of Neanderthals and anatomically modern humans.

Dr. Antonio Rodríguez-Hidalgo is the 2nd consecutive Spanish researcher receiving the award for this work on Sierra de Atapuerca. 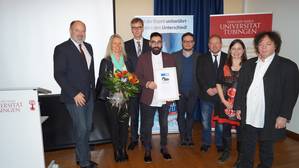 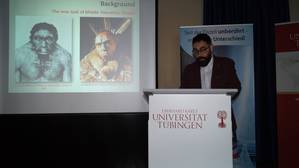 This possibility is often debated in Scandinavia, supporters of the idea relying on private collections. Dr. Trine Kellberg Nielsen organised surveys and examined those private collections to find evidence for Neanderthal occupation of Scandinavia during the Eem warm period. She concluded occupation was sporadic at best, providing concrete scientific evidence for a long debated question. 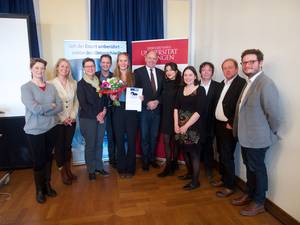 The Tübinger Förderpreis for Early Prehistory and Quaternary Ecology was awarded to Dr. Frido Welker of the University of Kopenhagen. He receives the award for his dissertation “From Bones to Proteomes: Gaining a biological understanding of the Middle to Upper Palaeolithic transition”.

Welker examines the archaeological remains during the transitional period of the Last Neanderthals and the early anatomically modern humans. Welker has developed a new approach to assign a site to one of the hominid species by analysing specific organic molecules contained in the site. With this method, he successfully assigned a Châtelperronien site to Neanderthal use. 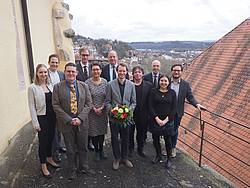 The Tübinger Förderpreis for Early Prehistory and Quaternary Ecology this year is awarded to Dr. Flavia Venditti of the Sapienza University in Rome for her dissertation  „The recycling phenomenon during the Lower Palaeolithic: the case study of Qesem Cave (Israel)“. Venditti researches the production of small cutting tools from larger, no longer usable tools and their usage around 400,000 years ago.

Venditti was able to show that tools were recycled in Qesem Cave starting 420,000 years ago. The reuse of materials continues up until 200,000 years ago. Tools from "recycled" materials were long regarded as provisionary - Venditti's work shows the importance of these intentionally manufactured smaller tools.