New research published in the journal Scientific Reports has found that bacteria are able to pump electrons, or “energy” directly into solid, conductive magnetic minerals which can potentially be used for long range transport processes. The international team of researchers was led by Dr James Byrne and Professor Andreas Kappler from the Centre of Applied Geosciences at the University of Tübingen, Germany. They suggest that electron hopping within a solid magnetic mineral, called magnetite, can be triggered by microbial activity. This offers an exciting breakthrough in the understanding of how microorganisms are able to access substances for growth and respiration over long distances. It also has the potential to open up new energy storage technologies which combine easy to grow bacteria with magnetic iron deposits which are highly abundant in the environment.

Energy production through the exchange of electrons has long been known to be the driving force behind all life on Earth. Bacteria generate energy by shifting electrons from a source to a sink. Finding these different sources and sinks however can prove challenging to the bacteria and consequently many organisms have developed strategies to use different kinds of materials for this purpose. Using magnetic based measurements, high resolution electron microscopy and the powerful synchrotron facility at the Diamond Light Source in the UK, the team showed that many of these microbes can pump or extract electrons directly into magnetic iron particles. In this way, the particles can be used to store energy, or even be used as a mediator for transferring electrons over relatively long distances. This is particularly interesting when considering the huge distances over which many of these processes need to take place. Bacteria are commonly only about 1 µm long which is about 100 times smaller than the width of a human hair. Despite this these bacteria can transfer electrons over distances many times larger than themselves, sometimes over as much as several cm, the equivalent of a human eating an apple from several km away. To do this, the microbes must produce their own electron carriers or take advantage of the materials surrounding them which in this case is magnetite. The results presented in the paper show the exciting potential for different types of bacteria to store electrons within a magnetic mineral that can then be accessed by different bacteria, potentially allowing electrons to be shared across long distances.

The international researchers from Germany (The University of Tübingen), the UK (Diamond Light Source and The University of Manchester) and the USA (University of Minnesota and Pacific Northwest National Laboratory) were able to show that whilst some types of bacteria can only extract electrons from the outer few nanometers of the magnet (iron oxidation), other types can successfully pump electrons into the magnet’s interior (iron reduction). Furthermore, the researchers were able to identify differences in behavior of the bacteria depending upon the size of the magnetic particle grains. For instance, bacteria which cause iron oxidation are highly sensitive to differences in particle size meaning that they require the smallest types of particle for growth and respiration. Bacteria which cause iron reduction however do not seem to have a preference for particle size and can use any size of magnetite as an electron sink.

According to the lead author Dr James M Byrne: “These findings have clear implications for the ability for bacteria to physically store electrons within a commonly available material which perhaps could be extracted at a later date, either by bacteria or even by industry.” 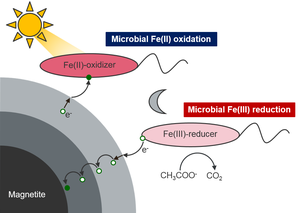