A new method measures the immune cell response within minutes

T cells fight pathogens and tumors: Researchers from the Universities of Tübingen and Lübeck present a simple and fast method to rapidly assess their function

To fight pathogens or tumors, the body relies on various types of lymphocytes, including T cells, which recognize specific structures (antigenic peptides) on altered cells which are presented on specialized cell surface molecules called HLA. A new study presents a method with which the T-cell immune response can be assessed in a very short time after blood drawing. A research team headed by Prof. Dr. Jan Born of the Institute for Medical Psychology and Behavioral Neurobiology and Prof. Dr. Hans-Georg Rammensee of the Interfaculty Institute for Cell Biology at the University of Tübingen and by Dr. Tanja Lange of the Clinic for Rheumatology and Clinical Immunology at the University of Lübeck has established this novel method. Due to its simplicity, reliability and versatility, it could be broadly implemented for basic research and in the clinical setting. The results of the study were published in Proceedings of the National Academy of Science of the USA (PNAS).

T lymphocytes as well as B lymphocytes are cells of the immune system specialized in fighting pathogens. In order to assess how well the immune response works, the antibodies produced by the B lymphocytes and released into the blood can be easily measured by well-established methods. However, to fight many infections or cancer, a good T-cell response is crucial; new cancer immunotherapies are also often based on a T-cell-dependent immune response that detects and kills abnormal body cells. The methods used so far to test this T-cell response are technically cumbersome and time-consuming and are therefore used only to a limited extent in research and daily patient care.

“This could be a game-changing method”, says Dr. Stoyan Dimitrov, first author of the study. The method recognizes the antigen-specific T lymphocytes within a very short time by identifying structural changes of the so-called integrins, a type of molecules expressed on the cell surface of T cells. “Our method could rapidly replace the techniques in use for measuring functional T cells. It is much faster and easier to perform, and does not require sophisticated reagents”, says Dimitrov. “We have successfully applied the method in two different studies into the role of sleep in fighting chronic infection – with the cytomegalovirus – and in enhancing vaccination efficiency – against the yellow fever virus”, says Jan Born.

T lymphocytes play a key role in many infections, such as malaria, HIV, tuberculosis, herpes and hepatitis. “Still, T cell-mediated immunity is currently routinely assessed only for tuberculosis”, says Tanja Lange. "Our new method could be widely used," adds researcher Dr. Cécile Gouttefangeas. "It is also suitable for faster and accurate monitoring of T-cell immune responses in cancer patients, as well as to test the efficacy of novel immunotherapies such as experimental cancer vaccines or so-called checkpoint inhibitors.” “The method could be also used to isolate functional anti-tumor T cells for anti-cancer adoptive cell-transfer immunotherapy”, adds Hans-Georg Rammensee. 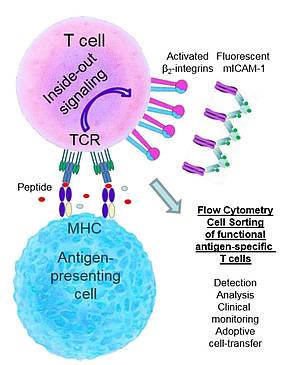 The new method identifies structural changes in the integrins, certain molecules expressed on the cell surface of the T cells, and thus detects whether the T lymphocytes are working effectively. 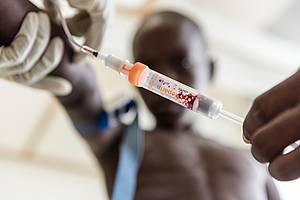 The new method can be used to check whether a vaccine has worked, as shown in the publication with the yellow fever vaccine. The measurement, taken two weeks after vaccination, takes only a few minutes.
Photo: Christoph Jäckle/University of Tübingen