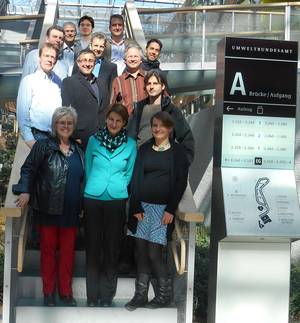 The ubiquitous use of pharmaceuticals leads to the frequent detection of these substances, like antibiotics, analgesics or beta-blockers, in the aquatic environment. Though we do know of their presence, we only know little about their effects on aquatic organisms, especially under field conditions. Useful effect-based monitoring tools are currently lacking.
The project Eff-Pharm is funded by the Umweltbundesamt (FKZ 3713 63 410 1/2). The project is split into two parts:

Part 1: a literature review, which was conducted in 2013, and

Part 2: effect-based in vivo and in vitro-studies which started in March 2014 and will end by February 2016.

The aim of the literature review was to gain an overview on recently published literature on pharmaceutical effects and accumulation, as well as possibilities for the monitoring of pharmaceuticals with in vivo-systems. We created a database on published effects of various pharmaceuticals of high priority, as well as literature databases containing all relevant publications. The final report can be found here.
With the second part, we aim to develop new, mode-of-action based in vitro systems, which can be used to detect specific pharmaceutical classes as a whole. In specific, a system for the monitoring of non-steroidal anti-inflammatory drugs (NSAIDs), represented by diclofenac, and beta-receptor-blockers, represented by metoprolol, shall be designed (Steinbeis Transfer Center Mannheim). The development of these systems is accompanied by in vivo studies on effects in trout (University of Tübingen), gammarids (GWT) and annelids (University of Frankfurt ). This will allow linking the effects visible in the in vitro-systems to possible effects in exposed animals. All experiments are accompanied by chemical analyses in water and biota (TZW).