Here are most recent research highlights presented. Research effords were mainly devoted to the influence of graphene intermediate layers on interface properties between transition metal phthalocyanines and metal substrates.

1. Influence of Graphene on Charge Transfer between CoPc and Metals: The Role of Graphene-Substrate Coupling 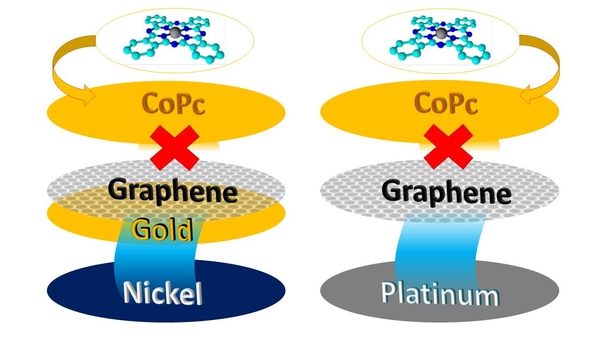 We have shown that the electronic configuration of the central metal atom of CoPc is significantly altered at the interface to Pt(111). However, such a strong interaction between CoPc and Pt(111) can be prevented by the insertion of a graphene buffer layer. This is in contrast to CoPc on graphene/Ni(111), where a charge transfer occurs from Ni(111) through the graphene intermediate layer to the Co ion of CoPc. However, the situation is very similar to CoPc on graphene/Pt(111) if the graphene on Ni(111) is intercalated by gold. Since both graphene on Pt(111) and intercalated graphene on Ni(111) are weakly bonded and weakly doped, the degree of chemical interaction with the substrate and the level of doping of the graphene intermediate layer are considered crucial for the interaction between CoPc and the substrate. 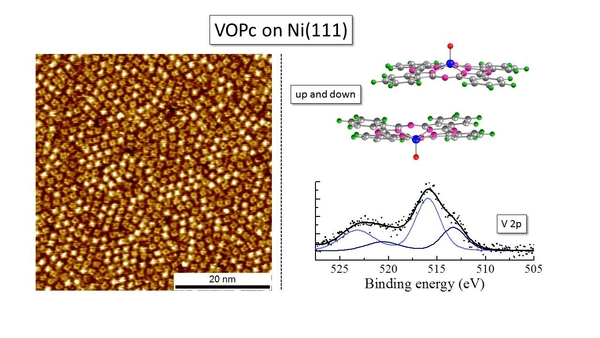 We studied the electronic structure of VOPc and interface properties to Ni(111) and graphene/Ni(111). Polarization dependent XAS measurements reveal that VOPc planes are highly oriented, flat lying on both substrate surfaces. The central metal atom of VOPc undergoes charge transfer at the interface to Ni(111) most likely depending on the molecular orientation at the interface (oxygen-up or oxygen-down). The charge transfer can be completely prevented by the introduction of a graphene intermediate layer. Graphene affects also the energy level alignment at the interface – the relative position of the HOMO to the Fermi level was distinctly lowered due to the buffer layer between Ni(111) and VOPc.