Senescence as a tumor suppressor and immune-modulatory mechanism

In every second of our life, about a million new cells are born and a million old or damaged cells die. This natural cell death process, called apoptosis, is a fundamental process to regulate tissue homeostasis and to eliminate unwanted cells. Apoptosis also forms a defense mechanism against microbial pathogens. Disturbances of apoptosis, on the other hand, can contribute to the pathogenesis of diseases. Too much cell death may cause degenerative diseases such as Parkinson's disease or liver failure. Conversely, too little cell death results in cell accumulation that may cause tumor development or autoimmune diseases. We are studying several genes that control apoptosis and determine how their alteration causes disease processes. Clarifying the biochemical pathways controlling cell death will inevitably have clinical benefits, by suggesting novel strategies for inducing cell death in cancer cells or for preventing cell death in degenerative disorders.

We are investigating the contribution of apoptosis to certain diseases including cancer and liver failure. Moreover, we try to explore whether apoptosis-resistant tumor cells can be sensitized to other modes of growth control including necrosis, autophagy, mitotic catastrophe or cellular senescence. The identification of resistance mechanisms against different types of cell death should yield hints into why cancer cells often escape from anticancer treatments. Furthermore, distinct types of cell death and growth arrest may have different effect on the immune system. Therefore, the investigation of cancer cell death modalities and their impact on the immune response may yield additional clues for the understanding of therapy resistance. 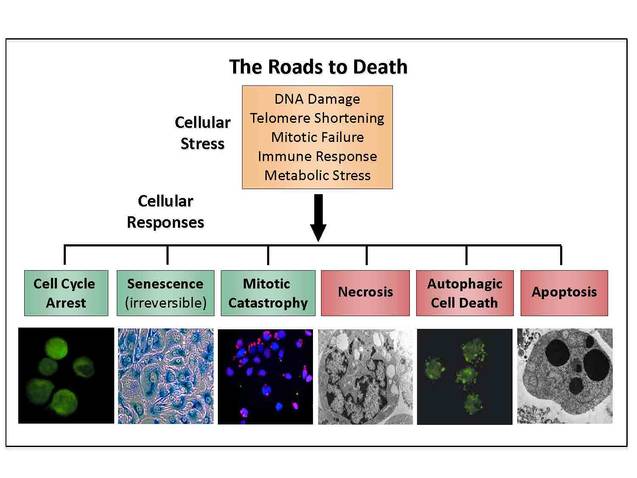 Apoptosis is a rapid process that is characterized by stereotypical morphological alterations, including membrane blebbing, cell shrinkage, nuclear condensation and DNA fragmentation. The key enzymes of apoptosis are intracellular proteases, called caspases, whose substrates are various vital proteins. To date, 14 members of the caspase family are known, which are all synthesized as inactive precursors. Various apoptotic stimuli, such as irradiation, chemotherapeutic drugs or the binding of cytokines to receptors, lead to the activation of caspases. Similar to the coagulation system caspases form a proteolytic cascade that serves to amplify the apoptotic signal. At the beginning of apoptosis, initiator caspases are activated first, which then activate effector caspases that cleave various proteins necessary for cell integrity.

The activation of caspases is achieved via two principal signaling pathways, namely by death receptors (CD95 and the TNF and TRAIL receptors), and by a mitochondrial pathway, which both depend on the stimulus-induced formation of large multi-protein complexes. Upon activation of a death receptor by a specific ligand, a death-inducing signaling complex is formed consisting of the adaptor protein FADD and caspase-8. The association of these molecules results in the activation of caspase-8 and finally induces the proteolytic activation of effector caspases. Another pathway is regulated by mitochondria. Various apoptotic stimuli lead to the release of cytochrome c from mitochondria. Cytochrome c normally functions as an electron carrier in the respiratory chain. However, during apoptosis it has an important role as a signal mediator. Released cytochrome c binds in fact to the adaptor protein Apaf-1, and forms with caspase-9 the proteolytically active apoptosome. In order to control death processes, cells express various endogenous apoptosis inhibitors, most importantly proteins of the Bcl-2 and IAP families. Bcl-2 proteins are essential regulators of apoptotic processes at the mitochondrial level and can either inhibit or activate the pro-apoptotic release of cytochrome c. IAP proteins, on the other hand, efficiently block apoptosis by directly inhibiting active caspases.

Our group is pursuing several avenues of research to elucidate different pathways of apoptosis and cell death resistance. We have investigated how individual caspases become activated, and how caspase activation results in the apoptotic phenotype. Another focus of the laboratory is on identifying proteins that positively or negatively regulate the cell death machinery, with a particular emphasis on molecules that might contribute to chemo- or radioresistance of tumor cells. In this context, we investigate how DNA damage induced by anticancer drugs is interconnected to cell cycle control and the mitochondrial apoptotic machinery. In addition, we are interested to clarify the role of apoptosis and caspases in different diseases, such as tumorigenesis, liver diseases and microbial infections. Uncovering the molecular mechanisms responsible for the dysfunction of apoptosis in the human diseases will provide the basis for the development of new diagnostic and therapeutic strategies in clinical trials. 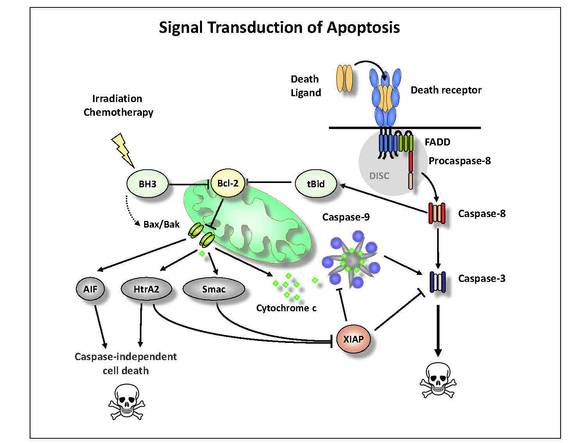 Senescence as a tumor suppressor and immune-modulatory mechanism

In addition to apoptosis, induction of cellular senescence is frequently disturbed in cancer cells, implying that senescence acts as an antitumor barrier. Moreover, radiation and many chemotherapy can induce either apoptosis or senescence, suggesting that both responses influence the outcome of cancer therapy.

Senescent cells are characterized by an enlarged, flattened morphology and increased cytoplasmic vacuolization. The most commonly used marker for senescence is staining for senescence-associated β-galactosidase, which is however limited in its application, because the molecular mechanisms that define this activity are not understood. Cellular senescence involves an 'irreversible' cell-cycle arrest. Unlike apoptosis, however, the senescence phenotype accumulates over multiple cell divisions, suggesting an involvement of epigenetic machinery and histone methylation. Senescent cells exhibit also characteristic changes in chromatin structure, termed senescence-associated heterochromatic foci. Although senescence can be induced by different stimuli, it is generally associated with the induction of a DNA damage response and the activation of p53 and p16/retinoblastoma protein pathways.

The senescence response causes dramatic alterations in cellular metabolism including the secretion of several cytokines and growth factors that constitute the so-called senescence-associated secretion phenotype (SASP). Indeed, certain cytokines play a senescence-enforcing role by increasing the DNA damage response, thus establishing a link between senescence and the immune system. Ironically, there is also evidence that due to the secretion of cytokines senescent tumor cells might drive the progression of cancer over time. We are interested to understand how senescent tumor cells interact with the immune system.

Our final goal is to gain insights into the role of senescence as tumor suppressor mechanism. To this end, we try to identify novel markers of the senescence phenotype, investigate the mechanisms underlying the senescence-associated secretion of cytokines and the interplay of senescent cells with the immune response. Upon therapy-induced DNA damage p53 can either induce transient cell cycle arrest, senescence-associated permanent growth arrest or apoptosis. We therefore explore how cells 'choose' between, apoptosis or senescence, and how p53 and its interaction partners can differentially regulate both cell fates by induction of distinct target genes. In this context, we also analyze how novel splice variants of p53 as well as metabolic pathways interfere with the transcriptional response of p53 to DNA damage. 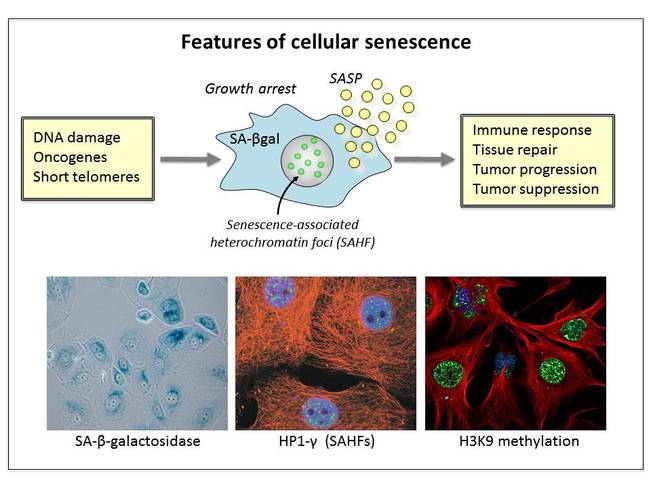 Another focus of our work includes transcription factor NF-κB which acts as an important inflammatory mediator, but is also involved in cell cycle control and cell death by regulating the transcription of various anti-apoptotic genes. Aberrant activation of NF-κB therefore not only contributes to several inflammatory diseases, but is also crucial to oncogenesis and anti-cancer therapy resistance.

NF-κB transcription factors are normally inhibited by association with inhibitory IκB proteins that keep NF-κB in an inactive state in the cytoplasm. Upon cellular stimulation, usually involving signals related to stress or pathogens, NF-κB is released from the IκB protein and translocates to the nucleus. This liberation is accomplished by signal-induced phosphorylation and ubiquitin-mediated proteolysis of the IκB inhibitors. Furthermore, additional control mechanisms modulate NF-κB activity, such as promoter-specific exchange of NF-κB subunits and posttranslational modifications by phosphorylation, acetylation or ubiquitination. The pathways regulating NF-κB are therefore interesting targets for the development of new anti-inflammatory and anti-cancer drugs.

Recently, we have identified a new IκB protein, called IκBζ, which differs considerably from the prototypical inhibitor IκBα. In contrast to the cytoplasmic IκBs, IκBζ is localized in nuclear dots, where it associates with histone deacetylases. In addition, IkBζ is only inducibly expressed and not targeted for proteasomal degradation. Most remarkably, IκBζ can either suppress but also activate a particular set of NF-κB target genes. During these events IκBζ interacts with the DNA-binding p50 subunit of NF-κB. Furthermore, in chromatin immunoprecipitation experiments we found that IκBζ can directly interact with the endogenous promoters of certain NF-κB target genes. Thus, our findings indicate that IκBζ is a novel regulator of the immune response that can directly participate in transcriptional activation rather than acting as classical IκB protein.

To elucidate the specific biological role of IκBζ we are studying its posttranslational modifications, interaction partners and its influence on chromatin structure. Furthermore, we investigate its physiological function by analyzing IκBζ gene-targeted mice in different disease models. 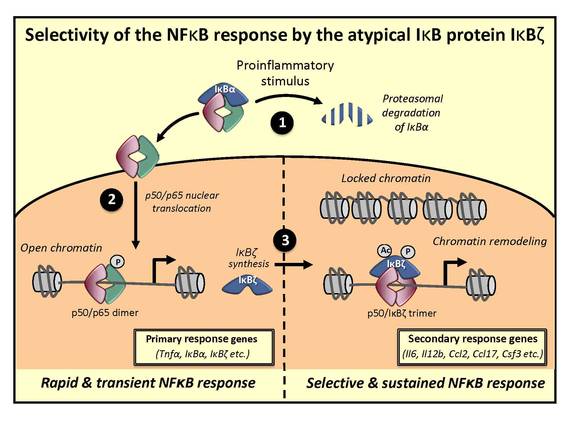 Induced pluripotent stem (iPS) cells can be generated from ordinary somatic cells, such as fibroblasts, through the forced expression of four or less transcription factors required for maintaining a pluripotent state. The event that causes differentiated cells to revert to an undifferentiated state of pluripotency is known as reprogramming and holds much promise for the advancement of stem cell research as well as for drug development and modeling of diseases. Despite the enormous potential, however, the rate at which somatic cells are reprogrammed into iPS cells is extremely low, reflecting the need for a better understanding of the reprogramming process. Our lab tries to understand the molecular mechanisms underlying reprogramming and self-renewal. In particular, we are interested whether interference with stress pathways such as senescence, DNA damage responses and cell death improves the reprogramming efficiency. iPS cells are typically generated by exogenous expression of reprogramming factors using viral gene delivery, raising the problem of genomic integration and potential tumorigenesis. We are therefore also investigating whether small molecules targeting stress pathways or non-genetic strategies using recombinant proteins can compensate for the viral delivery and increase the efficiency of reprogramming for the production of safer iPS cells. 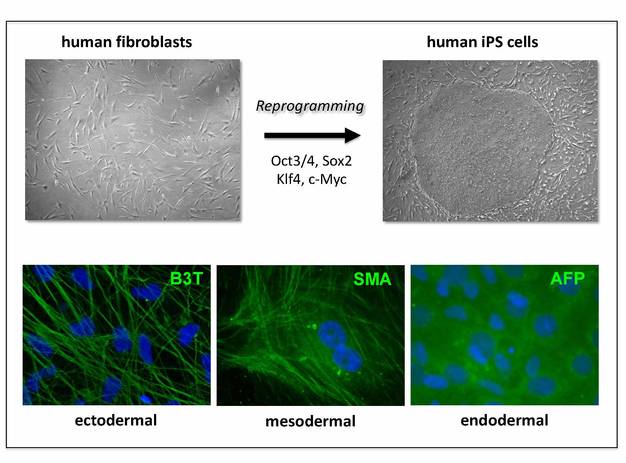 In collaboration with clinical partners, the Comprehensive Cancer Center Tübingen and the German Consortium for Translational Cancer Research, we aim at translating our results into new therapeutic and diagnostic approaches. For instance, we have previously shown that caspase inhibitors are potent cryoprotective agents that improve the recovery of cryopreserved cells and strongly enhance the colony-forming activity of hematopoietic progenitor cells. We have further established biomarkers of cell death that can be employed to monitor tissue injury or therapy responses. We showed that apoptosis and caspase activation closely correlate with disease severity of liver damage in chronic hepatitis C virus infection. Increased caspase activation was not only detectable in liver biopsies, but also in serum samples of patients with chronic liver disease. Importantly, our non-invasive biomarkers of cell death proved to be more sensitive than traditional surrogate markers of liver damage and could detect early liver injury even in patients with normal transaminase levels. Thus, apoptosis does not only contribute to liver damage, but might also serve as reliable diagnostic tool to monitor liver disease activity and to predict disease outcome. Interestingly, we have recently shown that measurement of caspase activation might be also a useful serum biomarker for monitoring treatment response in patients with colorectal cancer. In future, we will investigate in larger patient cohorts whether, in addition to cell death, also the serological assessment of senescence might be employed for monitoring the efficacy of anticancer treatment.