Quantum chemical calculations are able, at least in principle, to lead to very accurate descriptions of molecules. However, using standard methods, like the traditional Hartree-Fock method, this can only be achieved for small to medium sized molecules due to the high power scaling behaviour with system size. For larger molecules approximate methods are needed. One of these, the adjustable density matrix assembler (ADMA), developed for ab initio quality quantum chemistry computations of proteins and other macromolecules, divides a molecule (target molecule) into fuzzy fragments. 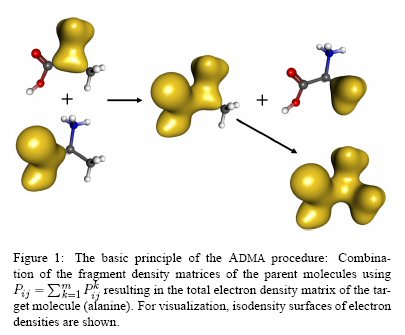 For these, conventional quantum chemical calculations are performed using moderate-sized parent molecules, which contain both the fragment and all the local interactions of the fuzzy fragment with its surroundings within a pre-selected distance. From these calculations, fragment density matrices are generated following the Mulliken-Mezey scheme:

An extension, the field-adapted ADMA approach, incorporates effects of additional, distant parts of the macromolecule by point charges}. In this way, the same accuracy can be achieved using a smaller distance criterion for the parent molecule largely reducing the amount of computer time needed. A known problem of the FA-ADMA approach as well as mixed QM/MM calculations is the treatment of the border between the quantum region and the point charges. In the original ADMA method, hydrogen atoms are used to cap the broken bonds between the QM and MM part. Another possibility to circumvent this problem is to use generalized hybrid orbitals (GHO) on the boundary atom next to the QM region. The striking advantage in the use of hydrogen atoms is their straightforward implementation. Since no special treatment is necessary during the quantum chemical computation, any quantum chemical package capable of Hartree-Fock-SCF may be chosen. But, considerable improvements of the results can be achieved by replacing the broken bond with hybrid orbitals. In the generalized hybrid orbitals (GHO) method applied here, the atom of the broken bond belonging to the MM part is described by four sp² hybrid orbitals. One of these orbitals is taken to replace the broken bond and is optimized during the SCF procedure; the three remaining hybrid orbital are parameterized specially to give the best approximation and are kept frozen. 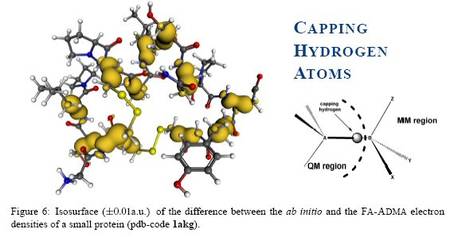 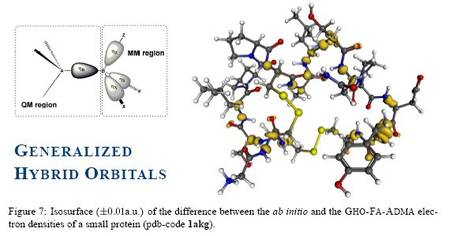 The results show that with the FA-ADMA method a quantitative evaluation and comparison of border region treatments became possible. This can be used to parameterize additional capping atoms, further optimize the GHO method (e.g. extend the method to sp² -hybridisation), or, in a similar way, for new developments and their evaluation in the field of QM/MM as well as fragment-based quantum chemical calculations.