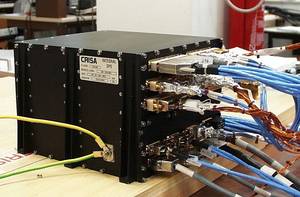 Each instrument on INTEGRAL uses an equivalent DPE as a data processing unit, which is manufactured at CRISA (Spain).

The DPE (Data processing electronics) is a computer device running with a 1750A Microprocessor and a clock speed of 13MHz (small compared to today available performance but fast compared to available radiation proved processors). The physical RAM is 2MByte of which 256Kbyte are accessible in logical address space.

For all instruments have the same DPE a common operation system was written at GMV (Spain) which supports both a high-level access to all basic interfaces of the DPE and a preemptive multitasking system.

Two fast serial lines allows to read in the scientific data from the detectors via HEPI.

The data processing itself is the so called IASW (Instrument Application SoftWare) which both commands/monitors the instrument and processes its data.

The on-board software for IBIS (the IBIS IASW, developed by IAAT) is split in different software tasks which are implemented by a preemptive multitasking system. The tasks are priority controlled allowing maximal performance on data processing.

Apart from tasks processing telecommands received from ground and housekeeping data collection most performance is spent on fetching and compressing histogram blocks as well as the evaluation of single photon events supplied from HEPI:

Performance tests have shown that HEPI is able to handle events up to a rate of 4,096,000 bit/sec which is 5 times more than required. Also the software running on the data processor can cope with 320,000 bit/sec provided the telemetry could be read out. The compression factor of 4:5 (single photons) and nearly 1:2 (histograms) will enhance the scientific value of data linked down.