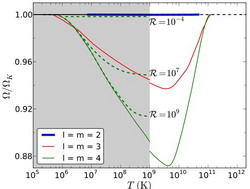 A classic result in gravitational physics is that pulsation modes in rotating compact stars can be driven unstable by the CFS-mechanism. It is envisaged that CFS-unstable modes could play a key role in neutron star astrophysics by producing detectable amounts of gravitational radiation which can be used to probe the neutron star interior structure. Additionally, they could provide a mechanism for limiting the stellar spin frequency. The realization of such gravitational-wave asteroseismology is expected to take place with the planned Einstein Telescope or more optimistically even with the Advanced LIGO and VIRGO instruments in the near future.

The initial work on the subject of gravitational radiation-driven instabilities was focused on the instability of the f-mode in Newtonian neutron star models and concluded that such systems might be observable sources of gravitational waves, even beyond our Galaxy, in the form of newborn neutron stars spinning near the mass-shedding limit. Subsequent work in the field was mostly driven by the discovery of a similar instability in the inertial r-modes and its potential relevance for systems like the accreting neutron stars in LMXBs. In more recent years, progress in numerical hydrodynamics has allowed the modelling of rapidly rotating relativistic neutron stars. Several calculations have shown that relativistic stars enter the f-mode instability region at a lower spin rate as compared to their Newtonian counterparts. This is an indication of an enhanced f-mode instability in relativistic stars, and provides strong motivation for a renewed investigation of the subject.

With the purpose of corroborating the case of a stronger relativistic f-mode instability, we presented the first calculation of the growth rate of this instability in relativistic stars and the associated instability window, i.e. the stellar parameter space where the mode growth due to gravitational radiation overcomes the dissipative action of neutron star matter. In a neutron star there are several viscosity mechanisms operating that could potentially limit or entirely suppress an instability. In this work, we covered the familiar shear and bulk viscosities for non-superfluid matter as well as the so-called mutual friction; an additional feature present at temperatures smaller than around 109 K, the regime where neutron and proton superfluid condensates will form.

For the specific stellar model used in this work, the quadrupolar f-mode is only marginally unstable; its instability window therefore negligibly small. The m=4 multipole is the one associated with the widest instability window, becoming unstable at roughly 88 % of the maximum rotation rate and with a growth time of around 1000 secs at the Kepler-limit. The astrophysical systems in which the f-mode instability is likely to operate are newborn, hot neutron stars, spinning close to the mass-shedding limit. Once the star is inside the instability region, the efficiency of the f-mode as a source of gravitational radiation is largely influenced by the cooling timescale. We obtain timescales around 1 − 100 yrs before the neutron star becomes superfluid and the CFS-instability is suppressed by mutual friction. Thus, the most favourable scenario where the mode has ample time to grow and eventually saturate by non-linear physics while emitting gravitational waves is clearly relevant.