In recent years there has been growing interest in the field of thin organic semiconducting films due to their successful application in optical and electronic devices, such as organic light emitting diodes (OLED) organic field effect transistors (OFET).
The establishment of such devices is expected to enable future flexible low cost electronics. For applications both polymeric materials and molecules with a lower molecular weight are well suited. The easy processibility of polymeric materials, in most cases from the solution, makes them especially suitable for low cost commercial applications in opto-electronic technologies, whereas crystalline molecular organic materials exhibit advantageous transport properties compared to their polymeric counterparts. The high performance of devices based upon small organic molecules is attained through the high degree of the molecular ordering, even an epitaxial film growth can be achieved.

In addition, since organic molecules can be grown in a clean environment under ultrahigh vacuum conditions, enormous progress in the understanding of the fundamental electronic and structural properties of organic thin film systems has been made during the past decade.
In electronic devices, the interfaces between the electrodes and the active organic layers control the injection of the carriers and thus they have a dramatic effect on the device performance and efficiency. We focus therefore especially on interfaces of organic semiconductors. 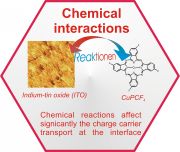 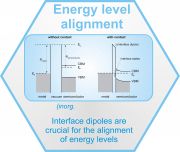 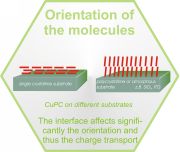 Photoemission spectroscopy in the lab or at synchrotron radiation sources is mainly applied for the investigation of interface phenomena (e.g. the energy level alignment or possible chemical interactions at the inerface).

Polarization-dependent x-ray absorption spectroscopy at synchrotron radiation sources or optical methods in the lab are used for the study the molecular orientation at the interfaces.