Prof. Hans Ulrich Vogel has been appointed a member of the International Scientific Advisory Committee of the “Codice Diplomatico Poliano/Marco Polo’s Diplomatic Codex” (CDP) project run by the State Archive of Venice (ASVe) and the Marciana National Library of Venice (BNM) for the celebrations commemorating the 700th anniversary of Marco Polo’s death (1324-2024). The project is directed by Dr Andrea Nanetti, Associate Professor at the NTU Singapore, School of Art, Design and Media.

Translating Western Science, Technology and Medicine to Late Ming China: Convergences and Divergences in the Light of the «Kunyu gezhi» 坤輿格致 (Investigations of the Earth’s Interior; 1640) and the «Taixi shuifa» 泰西水法 (Hydromethods of the Great West; 1612)
Project homepage

The DFG has granted Prof. Hans Ulrich Vogel, History and Society of China, Department of Chinese Studies (Institute of Asian and Oriental Studies, Faculty of Humanities), Tübingen University, a one-year extension of the above-mentioned project. The DFG support started in summer 2018 and thus will continue until October 2022.

Project Description
The immediate cause for starting this project was the sensational rediscovery in 2015 of the Kunyu gezhi 坤輿格致 (Investigations of the Earth’s Interior; 5 chap., 244 pp., 1640; hereafter KYGZ), a Chinese mining treatise based largely on Georgius Agricola’s (1494-1555) De re metallica (1556). This partial translation, initiated by the Chinese official Li Tianjing李天經 (1579-1659) and carried out by the Jesuit missionary Johann Adam Schall von Bell (Tang Ruowang 湯若望; 1592-1666), was lost for more than 350 years. Involving one of the most significant protagonists and polymaths of the German Renaissance and the most influential China-bound German Jesuit missionary, this text is of extraordinary importance not only for the history of East-West relations, but also for German cultural history.
In addition, and for comparative reasons, we are investigating another important and largely neglected text, the Taixi shuifa 泰西水法 (Hydromethods of the Great West; 6 chap., 208 pp., preface 1612; hereafter TXSF). The TXSF, mainly composed by the Italian Jesuit missionary Sabatino de Ursis (Xiong Sanba 熊三拔; 1575-1620), contains a systematic discourse on both theoretical and practical aspects of water and water management as well as forays into the medical field. Topically this technological manual differs from the KYGZ by embedding the presented new techniques in a traditional everyday setting, while at the same time it shares commonalities with the KYGZ in the domains of water drainage and natural philosophy.
The targets of this project are systematic, comprehensive as well as paradigmatic. It comprises studies of (甲) the Western books transferred to China, (乙) their selective translation by the Jesuits and their Chinese collaborators, (丙) the terminological and conceptual strategies and choices adopted during such efforts, (丁) the reception and perception of the texts on the Chinese side as well as (戊) the political, social, economic, cultural and ideological backgrounds and intentions of the different historical actors. The final aim of these case studies is (己) to deal with issues of intercivilisational encounters, especially (庚) in the field of useful and reliable knowledge, during (辛) the early period of globalisation, and (壬) to carry out comparisons based on the macro-sociological theory of the “Four Ways of Worldmaking” (power, wealth, meaning, knowledge), thus (癸) arriving at novel conclusions with regard to relevant convergences and divergences between China and Europe as well as the occurrence of the Great Divergence.

On the left side: «Kunyu gezhi», manuscript Nanjing Library, ch. 3A, 14b, detail showing hand-made geometrical drawing of the interior of a mine for measuring purposes; photography of Cao Jin, June 2015, by courtesy of Nanjing Library. On the right side: Our modern reconstruction according to the description in the KYGZ text.

Prof. Gunter Schubert successfully applied for 3 years of funding granted by the Deutsche Forschungsgemeinschaft (DFG) for a new research project titled "Totally Opening up? A Empirical Study on Xi Jinping's New Taiwan Policy". Prof. Schubert will closely collaborate with colleagues from Taiwan and the PRC. Fieldwork will be foremost conducted in Fujian and Guangdong provinces in China, and in Taiwan, with qualitative interviews focusing on the constituencies of Taiwanese working and living in China, Chinese government officials responsible for Taiwan-related policies, and government officials in Taiwan. The project ties in Prof. Schubert's longterm research on the political economy of Sino-Taiwanese relations, Taiwanese entrepreneurs operating on the Chinese Mainland (Taishang) and local policy implementation in the PRC.

We are happy to inform you that Prof. Hans Ulrich Vogel, Chair for Chinese History and Society, Department of Chinese Studies, Tübingen University, and Prof. Zhang Baichun 张柏春, Center for Comparative Studies, Institute for the History of Natural Sciences (IHNS), Chinese Academy of Sciences, Beijing, have been generously granted an amount of ca. 200.000 € by the Sino-German Center for Research Promotion (SGCRP, Chinesisch-Deutsches Zentrum für Wissenschaftsförderung, 中德科学中心), Beijing . This three-year grant is destined for the establishment of a Sino-German Mobility Programme (2020-2022) dealing with the “Transfer of Technical and Scientific Knowledge between Europe and China during the Early Modern Period” (近代早期中欧技术科学知识的转移).
More...

We are delighted to announce that the Chinese Studies Department at the University of Tübingen has joined the China-Europe Research Platform on Chinese Migration to and beyond Europe (CERPE) as a key participating institution together with the East Asian Studies and Research Centre at the Autonomous University of Barcelona in Spain, Sciences Po in France, the Department of Global Studies at the Aarhus University in Denmark and the Academy of Overseas Chinese Studies at the Jinan University in China.
CERPE is a research platform providing new opportunities for interaction and cooperation between at the moment 65 junior and senior scholars working on Chinese migration to, in and beyond Europe.
We are looking forward to working closely with our proficient partners and forming an interdisciplinary research network on overseas Chinese in Europe, which is not only long established and inextricable in the hosting societies but also facing new challenges in times of intensified transnational connections today.
CERPE homepage
Jun. Prof. Dr. Tseng Yu-chin

Prof. Hans Ulrich Vogel participated in the international conference "The Road to Cathay: East West Contacts in Marco Polo's Time" which took place on 24th and 25th October 2018 at Milano's Università Cattolica del Sacro Cuore, Department of Linguistic Sciences and Foreign Literatures, and which was also supported by the Confucius Institute of Milano. Prof. Vogel gave a lecture there on "Marco Polo's Crouching Dragons and Hidden Tigers". For the full programme of the conference see the flyer. 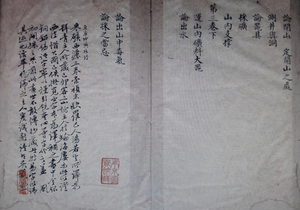