A central figure to connect democracy as an ethical ideal to education is John Dewey. However, one can trace variants of his concepts through the history of ideas and observe how they broaden out into different segments of American life from the Early Republic to the 21st century: Political Education as preparing people for informed participation in public life was seen as a central task of schools and colleges and also of the family, the community, churches, and other voluntary associations from, at least, the American Revolution onwards. Connected to Republicanism, concepts such as the “public man” or “Republican Motherhood” attest to the significance of Political Education in literature and culture well into the 19th century. But the social movements of the early 19th century also demonstrated that Political Education is not the privilege of highly educated experts but often the self-set task of ordinary people becoming activists. These were crucial in expanding the notion of the political to encompass questions of value, language, identity, and ethos as they embraced practices ranging from teaching and preaching to organizing spectacles and civil disobedience, and including decisions not to drink, making pledges, reading moral tales and poems to their children, or wearing abolitionist medallions. From Temperance and Abolitionism to Fridays for Future and #blacklivesmatter, political activism and strategies of mobilization, protest, and identity formation, forms of resistance and of grassroots organization all tie in with political education in a continuing feed-back loop.

The University of Tübingen and the English Department are excited and honored to host this year’s annual convention of the GAAS. Organizing this conference on “Political Education and American Studies” is a token for the close cooperation between American Studies and the Teaching of English as a Foreign Language – a field that has grown beyond a narrow focus on language to include intercultural competences, knowledge about inclusion and diversity, and a sensitivity to global issues of our time. With this conference, we want to acknowledge the political significance of our work, emphasize our cooperation with the Tübingen School of Education, but also to schools and places of learning outside the university, and cherish the intensive ties between students in different programs, teachers-to-be and mentors as well as the interrelation of theories and practices of pedagogy: This conference and its topic speaks to the specific situation of scholarship and scholarly practices here in Tübingen. And shortly before the university will be led by its first female rector since 1477, we want to take the opportunity to acknowledge our current president and fellow American Studies scholar Bernd Engler for his support in restructuring and redefining the education of teachers here in Tübingen.

The Fachtag Englisch took place on Thursday, 12 December 2019, at the University of Tübingen. During the day, a lecture and three workshops were grouped around the literarische Schwerpunktthema ‚Ambiguity of Belonging‘ for Abitur in Baden-Württemberg. In the morning, an introductory lecture  provided an overview of topics and theoretical discussions. Tom Franklin’s reading from his novel Crooked Letter, Crooked Letter at the Festsaal of the University was at the center of this teachers’ training day.
In the afternoon, three workshops  put a new spin on the literarische Schwerpunktthema ‚Ambiguity of Belonging‘ by juxtaposing academic insight and conceptual knowledge with teaching opportunities. Each workshop was headed by a team of professors and teachers/trainers. The topics served to expand on or differentiate existing teaching materials.

Starting in the summer term 2017, we cordially invite you to a guest lecture complementing and deepening the teaching degree courses.

Invited guests of universities, schools and areas which are close to EFL teaching (e.g. schoolbook publishing houses, administration, media) are invited to share their expertise and to point to the links between academic studies, foreign language education and school reality. 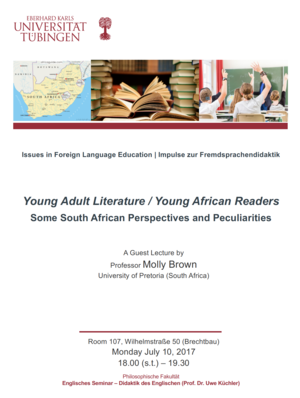 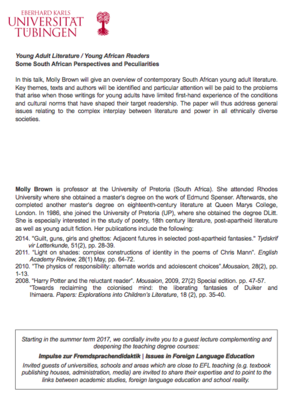 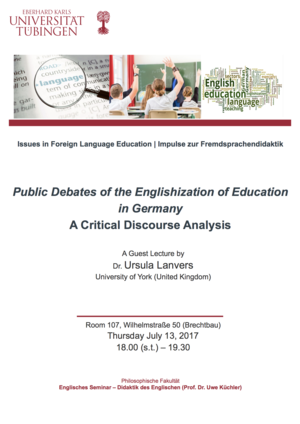 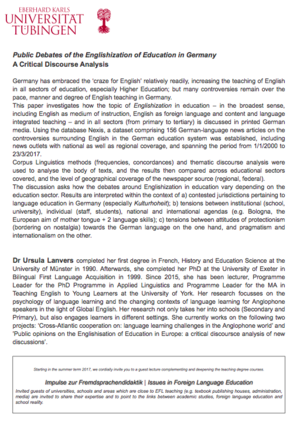