Antibiotic resistance is a major problem worldwide, and there is an urgent need for new antibiotics to be developed. In the past, most of the currently used antibiotics have been discovered by screening of microorganisms. However, as many of the accessible microorganisms have been screened already, it becomes more and more difficult to discover new therapeutics following this approach. Our group now works on genetic ways to engineer soil bacteria of the genus Streptomyces to produce new bioactive compounds, especially antibiotics and anticancer compounds. Streptomyces bacteria naturally make antibiotics, e.g. to kill competing other bacteria in the soil. We are interested in the discovery of the genetic information which enables Streptomyces bacteria to produce these bioactive compound, in the chemical and biochemical elucidation of the biosynthetic pathways leading to these compounds, and subsequently in the development genetic methods for the modification of Streptomyces bacteria in order to generate new antibiotics and anticancer compounds which may present useful drugs for human therapy.

The aminocoumarin antibiotics novobiocin, clorobiocin and coumermycin A1 kill bacteria by inhibition of the enzymes gyrase and topoisomerase IV, which are essential for the control of gene activity in bacteria. Novobiocin has been introduced into human therapy in the United States (Albamycin). 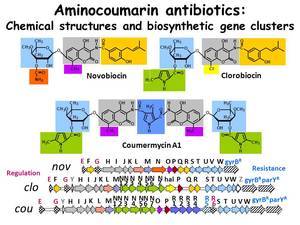 We have cloned and sequenced the biosynthetic gene clusters of the three above-mentioned aminocoumarin antibiotics. By gene inactivation experiments, heterologous expression experiments and biochemical investigations, we have been able to elucidate the function of nearly all of the biosynthetic genes contained in these gene clusters, thereby expanding our understanding of how such compounds are formed by microorganisms. 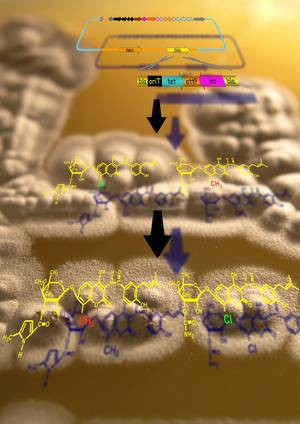 Many new aminocoumarins could be produced by targeted genetic manipulation in the natural producer strains, and also in heterologous host Streptomyces coelicolor after expression of the respective gene cluster. Production of new aminocoumarins was also achieved by mutasynthesis experiments and by chemoenzymatic synthesis in vitro. This allowed to elucidate the structure-activity relationships in the class of aminocoumarin antibiotics.

Phenazine natural products show antibacterial, antitumor and antimalarial activity. They are inhibitors of angiotensin-converting enzyme and steroid 5-α-reductase. Some other of the naturally occurring phenazines are bacterial virulence factors, important for pathogenesis during an infection. The synthetic phenazine clofazimine has been approved for human therapy in the treatment of leprosy.

Besides their role as antibiotics and virulence factors, phenazines have a variety of biological functions for the producing bacterium, often related to their capability to shuttle electrons by reversible oxidation and reduction. Phenazine biosynthesis is limited to the actinobacteria (e.g. Streptomyces), certain groups of Gram-negative proteobacteria (e.g. Pseudomonas) and a few archaea. Pseudomonas strains produce simple phenazines such as phenazine-1-carboxylic acid (PCA) and phenazine-1-carboxamide (PCN). In contrast, Streptomyces strains can form more complex phenazines with very diverse substitution patterns of the phenazine core. 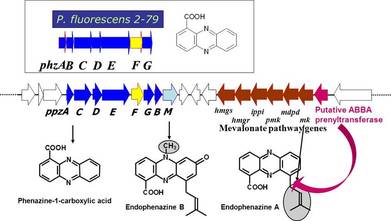 Our group has identified the first biosynthetic gene clusters for phenazines from Streptomycetes. Heterologous expression of these cluster in Streptomyces coelicolor M512 yielded phenazines in similar amounts as formed by the wild-type producer strain. We carried out inactivation experiments of genes in these clusters, followed by heterologous expression of the modified clusters and chemical analysis of secondary metabolite formation. This allowed us to investigate the function of individual genes for the biosynthetic pathway and for its regulation, and the identification of a new resistance mechanism against phenazines which is likely to offer a competitive advantage to a Streptomyces strain in nature.

Aromatic prenyltransferases catalyze the transfer of isoprenyl moieties to aromatic acceptor molecules. They are key enzymes for the generation of a huge diversity of primary and secondary metabolites in bacteria, fungi and plants, including important pharmaceuticals and toxins. Our group has contributed to the discovery of a new family of aromatic prenyltransferases. These enzymes show a unique three-dimensional structure, called PT-barrel fold. The PT-barrel is found exclusively in microbial secondary metabolic prenyltransferases with aromatic substrates. For proteins with the PT-barrel fold, the name ABBA PTases has been suggested, owing to the αββα succession of the secondary structure elements in the polypeptide chain which results in the characteristic antiparallel orientation of the β-sheets in the barrel. These soluble aromatic prenyltransferases show remarkable promiscuity for their aromatic substrates and can be used for the chemoenzymatic synthesis of new prenylated aromatic compounds. They represent promising tools for biotechnological and pharmaceutical research.