How do unicellular (cyano)bacteria sense their environment and respond to ambient changes? We address these fundamental questions by analyzing the response of unicellular (cyano)bacteria (Synechococcus, Synechocystis, and in one non-cyanobacterial project, using Bacillus subtilis) to changing nutrition. The cellular responses are highly coordinated and require a system, which integrates the central metabolic state of the organism. This is the task of the PII signal transduction family, which coordinate the balance of C/N metabolism with the energy status of the cells. How the PII proteins work and function at the molecular level is our primary research goal. Recently, we addressed the question how the cyanobacterial PII signaling system evolved during the endosymbiotic transformation into chloroplasts and thereby discovered the first glutamine sensory mechanism in the plant kingdom.

Furthermore, we are trying to apply the signalling and regulatory properties of PII proteins for the development of metabolite FRET sensors and metabolic pathway engineering.

A further focus is on the understanding of the acclimation to nitrogen starvation (chlorosis). We want to understand the principles underlying survival under non-growing conditions.

PII signal transduction proteins are one of the most widely distributed and highly conserved signalling proteins in nature. They play key roles in global nitrogen control by acting as a signal node that perceives signals from central metabolism and transmits a coherent response to various targets to balance C- and N- metabolism. PII proteins are homotrimers with complex inter-subunit communication between the binding site of the effector metabolites ATP, ADP and 2-OG (2-oxoglutarate).

The Forchhammer lab is exploring the role, structure and function relation of cyanobacterial PII proteins. 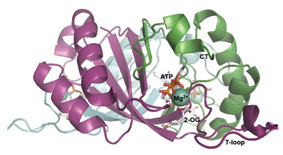 Recently we could identify the site of 2-OG binding, located in the vicinity of the ATP-binding site. In addition to responding to nitrogen levels, binding of ATP and ADP, which compete for the same binding site, allows PII also to sense changing adenylate energycharge and control its target proteins accordingly.In Synechococcus elongatus, PII binds a small protein termed PipX, which is a co-activator of the transcription factor NtcA, and regulates the key enzyme of the cyclic ornitine pathway, N-acetyl-L-glutamate kinase.The interaction of PII with NAGK plays an important role in the cellular metabolism. We could show that PII and NAGK from bacteria (S. elongatus) and plants (Arabidopsis thaliana) can functionally complement each other, demonstrating a strong conservation of this regulatory mechanism through 1.2 billion years of separate evolution. 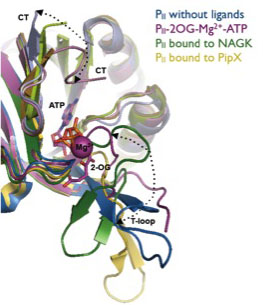 PII proteins also integrate metabolic signals by being covalently modified. In unicellular cyanobacteria of the genera Synechococcus and Synechocystis, PII responds to changing carbon and nitrogen availability by phosphorylation/dephosphorylation at a seryl-residue located at a surface-exposed loop structure. The PII phosphatase, which was identified in Synechocystis sp. PCC 6803, is a member of PPM/PP2C family of protein phosphatases, widely distributed in prokaryotes and eukaryotes. Mutational studies and biochemical analysis revealed insight into the molecular mechanisms of substrate recognition by this enzyme. 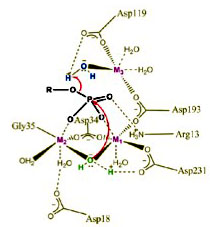 Catalytic mechanism of the PII phosphatase

A FRET sensor was developed which gives relativ information on the interaction of PII with NAGK and could be used as a sensor for 2-Oxo-glutarate.

Chlorosis is a process that describes the depigmentation of cyanobacterial cells triggered by different environmental influences like the deprivation for combined nitrogen. This phenomenon is known from plants especially in autumn but can also be seen in cyanobacteria. Boresch (1910) was the first to describe the chlorosis as a change in the colour of the cyanobacterial culture due to nitrogen depletion. This state ensures long-term survival due to low-level photosynthesis in chlorotic cells of the strain Synechococcus PCC 7942 (Görl et al 1998, Sauer et al 2001). We want to understand the molecular mechanisms of this remarkable ability to survive conditions of extreme starvation. How do the cells sense the onset of starvation, and how do they respond to this stressful condition?

The chlorosis response is governed by a complex and poorly understood regulatory network, which converges at the expression of the nblA gene, the triggering factor for phycobiliprotein degradation. We used a precise dosage of L-methionine-sulfoximine (MSX) which inhibits the glutamine synthetase mimicking the metabolic situation of nitrogen starvation. Addition of nitrate to such MSX-inhibited cells eliminates the associated redox-stress by enabling electron flow towards nitrate/nitrite reduction and thereby, prevents the induction of nblA expression and the associated chlorosis response. This work further established a cryptic role of nitrate/nitrite reductases as electron sinks to balance conditions of over-reduction (Klotz et al 2015).

Polyhydroxybutyrate (PHB) is a common carbon storage polymer among heterotrophic bacteria as well as for the model organism Synechocystis sp. PCC 6803 upon the limitation of macronutrients. We have previously reported a mutation in the gene sll0783 that impairs PHB accumulation in this cyanobacterium (Schlebusch & Forchhammer 2010). Metabolome analysis revealed a difference in sorbitol levels between the wild type and the mutant, indicating a more oxidizing intracellular environment than in the wild type. We confirmed this by directly measuring the NADPH/NADP ratio and by altering the intracellular redox state of wild type and sll0783 mutant and we were able to physiologically complement the mutant phenotype by making the intracellular environment more reducing. The NADPH pool is an important factor for regulation of PHB biosynthesis and metabolism, which is also of interest for potential biotechnological applications (Hauf et al 2013).

Chlorosis is not a dead end for cyanobacteria; actually they are able to regenerate within a few days after the addition of a nitrogen source and start to divide again. To gain deeper insight in this process, we examined the physiological and morphological changes during long-term nitrogen starvation and regeneration in Synechocystis sp.. The knowledge of the capacities of cyanobacteria to withstand adverse environmental conditions is fundamental to the understanding of the appearance of cyanobacteria in nature, where they play a dominant ecological role.

For further reading, please see the publication list on pubmed

Ammonium is one of the major nutrients for plants, and a ubiquitous intermediate in plant metabolism, but it is also known to be toxic to many organisms, in particular to plants and oxygenic photosynthetic microorganisms. Ammonium directly accelerates photo damage of PSII in Synechocystis sp. strain PCC6803, rather than affecting the repair of photo damaged PSII. Damage of PSII is triggered by a combined light and ammonium-induced destruction of the oxygen-evolving complex.

Wild-type Synechocystis cells can tolerate relatively high concentrations of ammonium because of efficient OSII repair, whereas mutants in PSII repair are highly sensitive towards ammonium [1]. Ammonium tolerance requires all three psbA genes since mutants of any of the three single pasta genes are more sensitive to ammonium than wild-type cells. Even the poorly expressed psbA1 gene confers elevated tolerate towards ammonium [2].