When phenotyping leaf senescence, leaf colouration is a commonly used parameter to quickly estimate senescence induction and progression. Usually leaves are ranked based on their degree of yellowing. Starting with green colouration, the leaves will turn yellow and eventually brown. In that way, leaf ageing can be monitored via leaf colour. However, colour perception is always very subjective and context dependent. Furthermore, it is difficult to assign a general colour to leaves presenting colour heterogeneity during senescence. All this will lead to substantial bias when scoring leaves based on their colouration. For this reason we developed an automated and reproducible approach to identify and quantify colours in pictures of single leaves in the context of senescence progression analysis called Automated Colourimetric Assay (ACA). 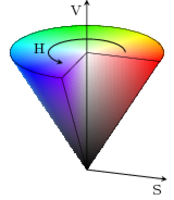 This approach is based on two separate scripts written for ImageJ and R (Schindelin et al., 2015 and R Core Team, 2016).The first part is an ImageJ macro designed to semi-automatically cut and export images of single leaves from an image of a dissected rosette. The second part is an R script to categorize the cut leaves. Here, leaves are analysed for the fraction of green, green-yellow, yellow, brown and purple pixels. Thi

s allows reproducible quantification of leaf ageing on macroscopic level. Both parts are published in Bresson et al. (2017) and are also provided here as source code for download as well as a manual. Additionally, we developed an online version with graphical user interface of the R script for simplified application by users foreign to R (ACA-Shiny). This version is also available for download and standalone use on local computers or your own Shinyserver.

ACA is based on classification of each pixel of a picture depending on its Hue, Saturation and Value (HSV) readings. In contrast to the widely used Red, Green, Blue (RGB) colour coding, HSV gives the opportunity to easily identify colours. In an RGB coded image the actual colour of a pixel would have to be calculated via the relative portion of each channel. Whereas in an HSV coded image the H channel defines the observable colourtone (set by different colour wavelengths) and is expressed in an angle from 0 to 360 degrees on a colour wheel. If different levels of saturation are also included, identifying a colour in RGB would be a rather complex task. In HSV, saturation is a measure of colour intensity indicating the range of grey in the colour-space from 0 to 100%. It allows distinguishing two close colours with the same predominant wavelength but with a distinct grey value. A lower saturation level reflects a faded colour, which means the colour contains more grey (S channel). The V channel directly represents the brightness of the colour image from 0 to 1 (i.e., totally black to white) and varies with S.

Furthermore, as the script is available as open source, modification for different areas of application (e.g. GUS-staining, HR quantification in pathogen assays etc.) or adaptation to different plant species is highly encouraged. To facilitate modification of the defined colour-ranges, we implemented an optional output of overlay images displaying which region within the given image was identified as which colour.

Although we are currently working on an automated color segmentation of the pictures, for the analysis with ACA, at the moment it is still necessary to have pictures of single leaves to feed them into the script. Manually cutting and exporting images can be a tedious and lengthy procedure. To allow efficient cutting and background cleaning of the acquired images, we devised an ImageJ script (here used v. 1.51j). This script is designed to automatically name and export selections of leaves. Image acquisition must be carried out under standardised conditions. Although colours in general will be recognized correctly even with variations in lighting, distinguishing between e.g. closely related colourtones will not work if lighting varies during image acquisition. This is why we recommend to either use a photochamber and zenithal imaging, where lighting is constant or to use a scanner.

Pictures of leaves of a dissected rosette would be cut into single images by using the above mentioned ImageJ script. After that, the single images are fed into the R script. Thus, pictures can be analysed in a pixel-wise manner allowing exact quantification of green, green-yellow, yellow, brown and purple portions within one leaf (example figure modified after Bresson et al. 2017).

Updates 27.2.2018
- Python Script for automated leaf cutting (Alternative to ImageJ) now available in the download section or on GitHub