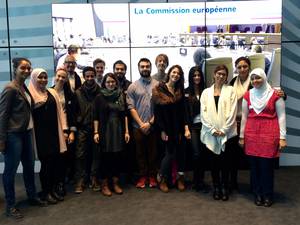 The AUC and Tuebingen CMEPS students went on their second excursion from December 3rd to 7th 2015. In Brussels the students met with representatives from European decision making bodies. They had inspiring discussions with a member of the European Commission on democracy deficits in the Union, as well as with a representative from the legal department on Human Rights in Europe and finally with a representative from the European External Action Service on migration and security policy. In addition, the participants met for a highly stimulating meeting with the MENA program director of the International Crisis Group (ICG) who offered them some insight in the practice of policy analysis and policy advice. Later that night, the students had the opportunity to receive input from four journalists from the Deutschlandfunk in a popular bar in Brussels’ city center. The following trip to Bonn started with a two-hour walk on the “Path of Democracy” through the former government area. The students had then time to visit the German History Museum. On its last day the group met with representatives from the Bonn International Center for Conversion (BICC) and discussed strategies of the promotion of peace. They then met with a senior researcher at the German Development Institute (GDI) who gave the students an insightful lecture on how to connect research and practice. Before travelling back to Tuebingen, the students visited the German Ministry for Economic Cooperation and Development (BMZ) and discussed the challenges of German aid. 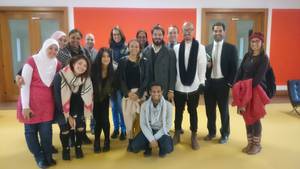 In mid-November, eleven CMEPS exchange students from Cairo, joined by other interested CMEPS students from Tübingen went on a field trip to Berlin. They were offered a diverse programme on German history and politics: A meeting with the Egypt officer and the officer of transformation partnerships in the Federal Foreign Office was succeeded by interesting discussions on foreign policy and democracy promotion in the German Bundestag and the Friedrich Ebert Foundation. The day was completed by the view over Berlin from the Reichstag dome. On Saturday, the students went on a city tour and visited different museums which encouraged active engagement with German history. After a change of location to Leipzig, the guided tour „On the trail of the Peaceful Revolution“ offered interesting insights and triggered inspiring comparisons with the recent developments in Egypt. The AUC-cohort will stay in Tübingen until January. 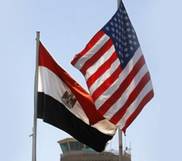 On 13th of February 2010, students of two graduate courses offered by the department took part in a simulation of negotiations between high-ranking representatives of the United States and Egypt in order to sign a bilateral cooperation agreement between the countries.

Under realistic terms, students of the graduate courses on “International Democracy Promotion”, representing the USA, and on “The Political Systems of the Middle East under Stress: External Challenges and Authoritarian Survival”, representing Egypt, negotiated a bilateral cooperation agreement. In two negotiation groups, they applied the theoretical knowledge they had gained in their respective seminar. Each student assumed a unique role as a variety of governmental and non-governmental actors were represented in each committee. Taking into account the real interests of their governments, representatives of the USA tried to convince their Egyptian counterparts to allow for more liberalization, while the Egyptians in turn tried to preserve their authoritarian power without losing U.S. support and economic cooperation. The talks focused mainly on economic policy as well as on national, regional and international stability and security. After a hard day of negotiations, the representatives signed a cooperation agreement. All participants appreciated the blend of theory and practice offered by the two courses and the joint negotiation phase.