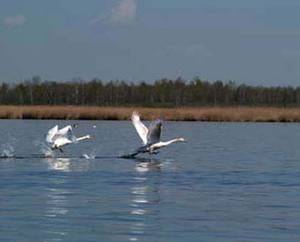 The research station of the Chair of Comparative Zoology is located at the edge of the Federsee basin in Upper Swabia, which was formed during the Riss Glaciation. The siltation of the Federsee (Pictures), which was dammed up during the Würm Glaciation, created an extensive valley bog in the post-glacial period, on which a raised bog shield grew up in the southern part, which is now largely destroyed by peat cutting. The area of the remaining lake (1100 ha) was highly reduced between 1787 and 1810 by two artificial lake falls (lowering of the water level through the construction of a drainage canal) (140 ha). The resulting moorland areas with the Federsee in the center were placed in a nature conservation as early as 1936. (NSG „Federsee“ 1400 ha). Other nature conservation reserves in the Federsee basin, which were later designed are: „Wild Reed“ (raised bog remnants, 23 ha, 1966), „Riedschachen“ (bog forest, 11 ha, 1941), „Western Federsee Reed“ (241 ha, 1999) and „Northern Federsee Reed“ (179 ha, 2001). For details see H. Günzl: Das Naturschutzgebiet Federsee. 1. Auflage 2007, Silberburg-Verlag Tübingen (Buy). 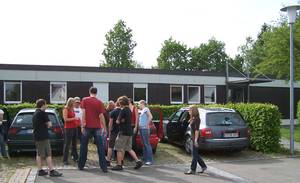 In 1969 the research station Federsee was inaugurated and has been used primarily for research work and excursions of the Chair of Comparative Zoology at the University of Tübingen. For this purpose the research station is equipped with overnight accommodations for researchers and excursion participants. It has several laboratories and a modern equipped class room where block seminars can also be held for example. For your own convenience there is a kitchen and a dining and common room available.(Pictures) If there are no reservations, guest researchers and excursions can also be included.
For reservations please contact our supervisor Dr. Henri Thomassen, Comparative Zoology, Auf der Morgenstelle 28, D-72076 Tübingen (E-Mail).

At the research station some scientific research was carried out for thesis and state examinations in the following fields: shallow lake limnology, faunistics of bog-dwelling vertebrates and invertebrates, biology and ecology of bog specialists, vegetation science and bog protection.
In recent years, one focus has been on research into the renaturation of the Federsee, which had a highly eutrophic condition due to the discharge of municipal wastewater until 1982 (the year of commissioning of a wastewater loop). A top-down intervention (reduction of the bream and bleak population) should accelerate the establishment of submerged plants in the lake. Therefore several thesis and state examinations served to monitor the success of this project in the last few years. Currently ongoing faunistic investigations deal among other things with the effects of human interference in the drainage ditches of the „Federseeried“.