Together with Prof. Dr. Peter Burnell (Warwick University, UK), Oliver Schlumberger has guest-edited a special issue for the international refereed journal Contemporary Politics which has been published in March 2010. This work goes back to two pre-organized panels at the World International Studies Conference held in Ljubljana, Slovenia, in 2008 and includes the majority of the presentations given there, but also includes a number of additional articles. 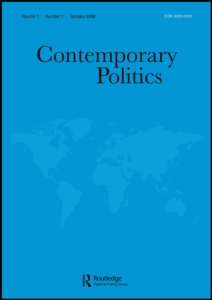 Regimes" and comes timely as political scientists are beginning to realize that instead of a unilinear trend towards global democracy, autocratic political rule is not some near-extinct dinosaur. This triggers new questions for research:

Has the last tide of democratization been replaced by a new wave of democratic reversal? Do two decades of international democracy promotion now have to compete with the promotion of authoritarian rule by powers that have resisted democratization internally? Are there more pressing grounds than ever to investigate international political influences on the prospects not just for transition to and consolidation of democracy but the persistence, resurgence and spread of more authoritarian regimes?

These are among the big issues raised in this special issue. It does not pretend to provide definitive responses, but rather makes a start over how to look for some answers. The Introduction spells out an agenda that should take a central place in future research into the influence of international politics on national political regimes. It gives a window onto how the multinational contributions in this issue add to our knowledge and takes that agenda further forwards.

Apart from the editors' substantial introductory article, other contributors include:

Peter Burnell is one of Europe's most eminent political scientists. He has authored and edited many books and articles and is the founding joint editor of the international refereed journal Democratization which is today established as one of the leading journals in the field, and the accompanying book series Democratisation Studies, published by Routledge. He also is an invited member of the founding Executive Committee of the journal Zeitschrift für Vergleichende Politikwissenschaft. After having loosely cooperated for many years, the forthcoming special issue highlights Peter's and Oliver's joint desire to push forward the frontiers of what we know about the reasons for the emergence and decay of democracies and autocracies around the world.