Our series of lecture "Dialogue with the Middle East" has been taking place since 2010 and seeks to bring academics and practitioners from the Middle East and North Africa and German togerther.

"Turkey at the Crossroads – The End of the Erdoğan System?" – Public Lecture by Turkish journalist Can Ataklı

On 18th January 2014, Turkish journalist Can Ataklı gave a public lecture entitled “Turkey at the Crossroads – The End of the Erdoğan System?”. Ataklı visited Tübingen at the joint invitation of the Turkish Society Tübingen (Türkischer Verein Tübingen e.V.) and our research unit to address a large auditorium in the university’s “Audimax”.

In his lecture, Ataklı talked about the historic foundations of today’s Turkey and addressed current challenges of the country and recent developments in the political sphere. Following his talk, he answered the audience’s questions.

Can Ataklı (born in 1956) studied Media Studies at the University of Marmara and worked for the daily newspapers VATAN, GÜNAYDIN and TAN. From 1996 until 2001, he was chief editor of the newspaper SABAH. Until 2004, he was director of the TV station STAR-TV and worked as a commentator for VATAN. Since August 2013, Ataklı is working for the television channel ULUSAL.

The recent uprisings in Tunisia, Egypt, and other countries have raised hopes for the spread of democracy throughout the Arab World. But do Arab citizens really share democratic norms and values? Arab and American Scholars have established the "Arab Democracy Barometer" in order to provide reliable data on the political attitudes of the Arab public. On Thursday, 30 June 2011, Dr. Walid Alkhatib, coordinator of the Arab Barometer, discussed the results of the latest survey and elaborated on attitudes towards democracy in various Arab countries. This presentation was the fifth lecture in the series "Middle East Politics in Dialogue" organized by the Research Unit on Middle East and Comparative Politics of the Institute for Political Science.

Dr. Walid Alkhatib is coordinator of the Polls and Surveys Unit at the Center of Strategic Studies at the University of Jordan. He holds a Ph.D. in Political Statistics from the University of Kent-Canterbury in the UK. His academic interests include democracy in the Arab World, Palestinian refugees and Palestinian identity as well as government performance in Jordan. Dr. Alkhatib was guest researcher at our Institute as part of the German-Arab Higher Education Dialogue.

Dialogue Forum with Jordanian and Egyptian Experts on “After the Revolutions: A New Political Landscape?“

At the invitation of our research unit for Middle East and Comparative Politics and the Seminar for Religious and Jewish Studies, the former Jordanian U.N. ambassador Hasan Abu Ni’mah and Prof. Dr. Muhammad A. Sharkawi, professor at Cairo University, discussed the current upheavals in the Arab world. In their speeches they examined both causes of the protests and their consequences for the whole Arab region.

Prof. Sharkawi especially elaborated on achievements of the revolution, but also on prevailing challenges. The new Egyptian society would be democratic and religious. According to Prof. Sharkawi, there was no reason for concerns about Islamic extremists because adherents of Islam had a disposition to moderate attitudes. This was reflected in recent exchange efforts between the Muslim Brotherhood and clerics of al-Azhar University. He furthermore stressed the role of Arab women during the upheaval, which signified another step towards emancipation.

H.E. Hasan Abu Ni’mah called the current developments in the Arab world irreversible. People stood up against repressive regimes even if this led to them being personally threatened. In this process their demands were basically the same in all countries affected. Economic demands were always followed by political ones in second place. He criticized the behavior of Western states which at first had been one-sidedly concerned with the security of Israel.

The talks were followed by a vivid discussion with the audience who took advantage of this opportunity for exchange with our guests, while the moderators Schreiner and Schlumberger remained in the background.

Nadine Sika: "Dynamics of Youth Political Engagement and the Persistence of Authoritarianism in Egypt"

On 8 July, Dr. Nadine Sika, visiting scholar at the Institute of Political Science, presented the findings of her research on Egyptian juveniles. On the basis of several polls and analyses she demonstrated that youth political engagement is low in Egypt, although young people show a positive attitude towards democracy. Their interests lie mainly in the economic and social sphere.

Dr. Nadine Sika received a doctorate from Cairo University in 2008. Beginning in fall 2010, she will be teaching at the American University in Cairo (AUC). Both universities recently became partners of our Working Group.

On Thursday, 6th 2010, former Jordan ambassador to the United Nations, H.E. Hasan Abu Ni’mah, delivered a lecture on the relation between religion and politics in today’s Middle East. He put special emphasis on recent political events, like the attempted terrorist attacks at Times Square, and argued that activities of radical actors are ultimately politically, not religiously, motivated. Furthermore, he gave insight into his experiences as Jordan’s ambassador during the Oslo peace talks.

The lecture was followed by a debate moderated by Prof. Dr. Schlumberger.

Yahav Zohar: “On the Future of a Just and Sustainable Peace in the Middle East” 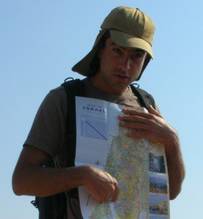 Yahav Zohar is a representative of the Israeli Committee Against House Demolition (ICAHD), a non-governmental organization that is part the Israelian peace movement. Following an invitation of Prof. Schlumberger, he delivered a lecture on sustainable peace in the Middle East, stressing the importance of a consistent policy in the field of human rights.

Prior to his visit to Tübingen, Yahav Zohar had been invited to Berlin in order to exchange his expertise with the Committee on Human Rights and Humanitarian Aid of the German Bundestag.

Subsequent to his lecture, Zohar was open for Q&A, moderated by Prof. Dr. Schlumberger.