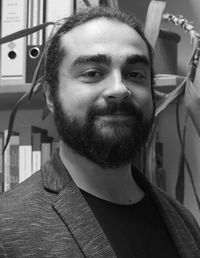 If needed, office hours can be requested one week in advance per mail.

Koray Saglam is funded by the Ph.D. scholarship programme "Trajectories of Change" by the foundation ZEIT-Stiftung Ebelin und Gerd Bucerius and conducts his research as part of the research group Middle East and Comparative Political Science.

Mr. Saglam completed his Bachelor of Science in International Economics and Middle Eastern Studies and graduated in economic history with his thesis titled “The Economics of the Mafia: can we identify regional characteristics?” covering the correlation and causation of human capital and organised crime.

In 2015, Mr. Saglam was distinguished with the “Award for Outstanding Position Paper” as part of the National Model United Nations delegation of the University of Tübingen to the annual international NMUN conference in New York.

Following that, he completed his graduate studies in Comparative Middle East Politics & Society and wrote his thesis about the political economy of Turkey within the scope of neopatrimonialism.

Over the course of his studies, Mr. Saglam also studied at the Eberhard Karls Universität Tübingen, at the CSU Chico, USA, as well as at the AUC in Egypt.