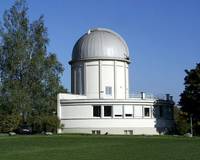 Already in 1511 the first chair for Astronomy and Mathematics was founded by Duke Ulrich. The chair was filled by the 59 year old pastor Johannes Stöffler (1452 - 1531) from Justingen. He constructed in 1511 the Astronomical Clock at the Tübingen town hall and he also developed the basics for the calendar reform wich was carried out in 1572 by Pope Gregor XIII.

Johannes Kepler (1571 - 1630) studied Theology in Tübingen. His most important teacher was Michael Maestlin, who was Professor for Mathematics and Astronomy in Tübingen from 1584 to 1631. He taught Kepler the revolutionary world view of Nikolaus Kopernikus.

Successor of Maestlin became Wilhelm Schickard (1592 -1635), who was a very versatile scholar and a younger friend of Kepler. Schickard is also the inventor of a mechanical calculator (1623), a fact that is known from his letters to Kepler. This calculator was reconstructed from written documents in Tübingen in 1960.

Only in the middle of the 18. century the astronomy in Tübingen made progress again. In 1752 an observatory was built at the northeastern tower of the Tübingen castle. It was equipped with a quadrant of 3 feet radius, a 16 feet telescope and a pendulum clock, which was an ordinary equipment in this time. Later the instrumentation was expanded by an instrument for measuring azimuth and height of stars, which was mounted in a hut with rotatable roof in the garden of the castle. 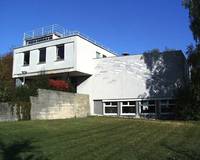 The observatory in the tower of the castle was operated until the 1950s. It was under Prof. Heinrich Siedentopf when in 1955 the construction of the observatory at Waldhäuser Höhe was begun and somewhat later also the new building of the institute at the Waldhäuser Straße was built.

In the 1960s already first rocket experiments were flown to take X-ray images of the sun. Under Prof. Joachim Trümper X-ray astronomy was done with balloon experiments. Today the institute is involved in numerous international satelite projects for the UV, X-ray and Gamma-ray region.

In 2001 the section Astronomy moved to the historic building at the Sand area, as the area around the observatory was needed by the town to build a new technology centre.

A detailed article about the history of astronomy in Tübingen was published by Prof. K. Walter in "Tübinger Blätter", Vol. 69, 1982, p. 65-70: "Vom Schloßturm zur Waldhäuser Höhe" (in german)