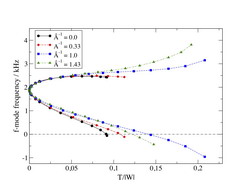 Rapidly spinning neutron stars can be prone to to the CFS instability. This instability, for quadrupole non-axisymmetric perturbations and uniform rotation sets in at comparatively large rotation rates. For higher values of the spherical mode number, the instability sets in for smaller rotational rates but the growth time is considerable longer and viscosity stabilizes the star.

The CFS instability is generic for the rotational modes, i.e. these modes are CFS unstable for any rotational rate while for pressure modes, the rotation rate has to exceed a certain limit. This limits corresponds to rotational frequencies of the stars which are 85-90\% of the Kepler frequency. These high spin frequencies have not yet been observed in nature but it is expected that they may be met in newly born neutron stars. Newly born neutron stars are expected to rotate not only fast but also differentially, and this is a factor that has to be taken into account in the study of instabilities.

Actually, differential rotation can appear in many phases of the stellar evolution of a neutron star, such as in protoneutron stars, in the massive remnant of binary neutron star mergers, or as a result of stellar oscillations (r-modes) that may drive the star into differential rotation via nonlinear effects. Since the ground based detectors are reaching sensitivities which allow the detection of gravitational wave signals from oscillating or unstable neutron stars, the critical point for the onset of instabilities, the growth times of the instabilities and the exact frequencies of the emitted waves are urgently needed.

Our simulations show that a small degree of differential rotation causes the ratio of the critical T/|W|, where the f-mode becomes CFS unstable, to the value of T/|W| at the mass-sheeding to decrease. This effect is visible for each considered equation of state and is even stronger for the stiffer ones. It implies that neutron stars can be destabilized by the CFS instability even if their spinning frequency is rather low compared to the Kepler frequency. Furthermore, when moving on to a high degree of differential rotation, the critical curve of any considered sequence exhibits a local maximum which is in agreement with Newtonian findings. Afterwards, the critical value decreases and for the sequences based on the stiffer equations of state it decreases even below the corresponding value for rigid rotation; i.e. the CFS instability may act even earlier than in rigidly rotating stars as long as the star rotates with a sufficiently high degree of differential rotation. Whenever differential rotation is present, the CFS instability is a promising candidate for the destabilization of a neutron star which may finally lead to a detectable signal of gravitational waves.