Simbol-X was an X-ray telescope project with participation from France, Italy and Germany. It would have been the first instrument at all to measure photon energies above 15 keV with the use of Wolter-focusing optics. The start of the project was originally planned for the year 2014 but cancelled due to lack of money. The main goal of Simbol-X was the construction of an instrument with a huge collecting area over a wide energy range as well as a very low internal detector background. One result could have been new discoveries of many weak unknown X-ray sources. The huge field of view and a large quantum efficiency as well as a very good resolution and a low internal background of Simbol-X could have brought a breakthrough in the field of X-ray physics and in the theories of particle acceleration. 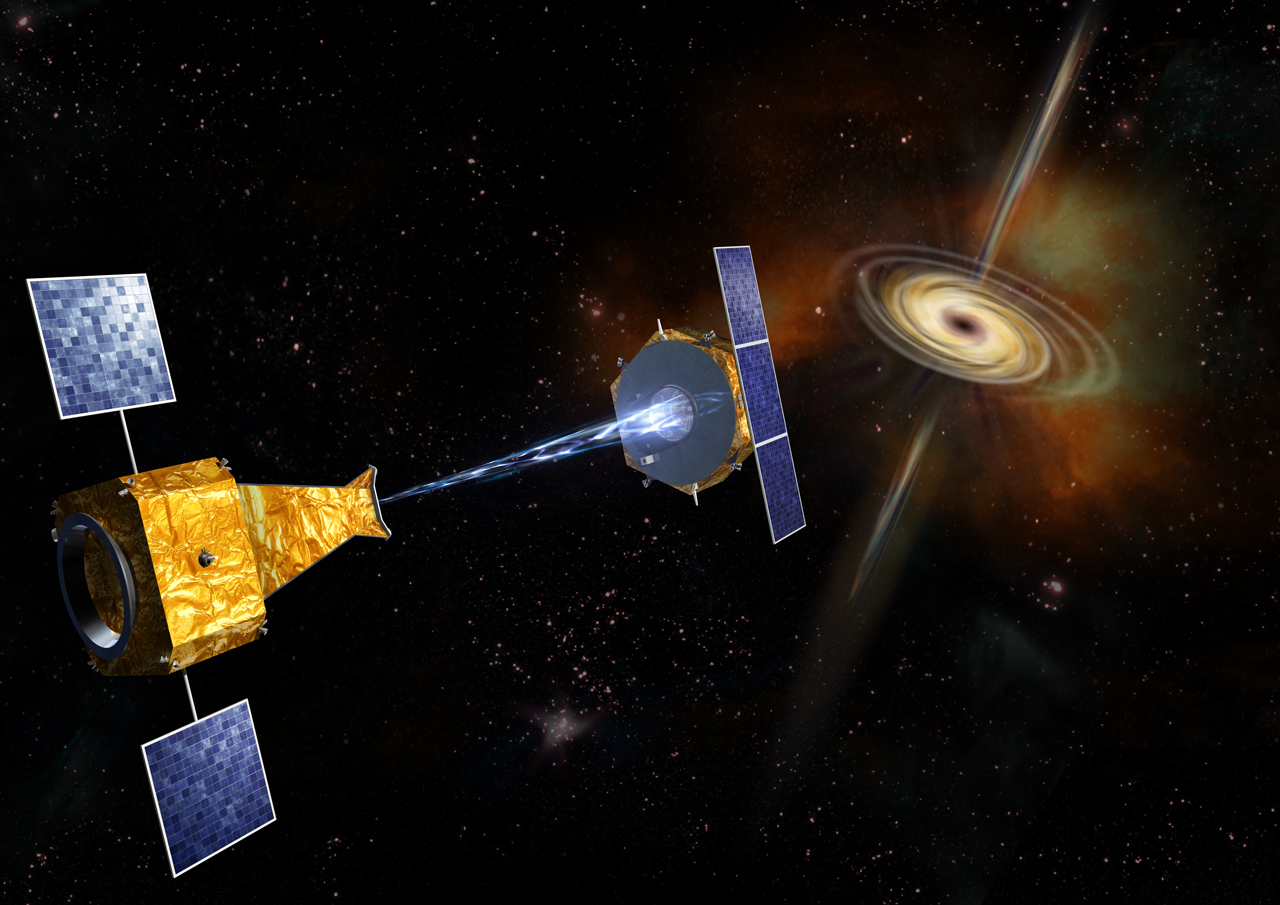 Start: planned was a launch for the year 2014

Simbol-X would have been the first scientific instrument made of two aligned modules which are moving together in formation flight. There are two separate parts which were to be launched together, one for the mirrors and one for the main detector. By separating the detector and the focusing optics, it is possible to focus and detect photons with energies above 15 keV, which is the limit reached up to now using focusing techniques. At higher photon energies the focal length would be much to large for the usual instrument with detector and optics on one platform. The focusing optics of Simbol-X are Wolter-mirrors with a focal length of about 20 m and made out of different mirror layers. Therefore, photons with energies up to 80 keV can still be focused. The present sensitivity and angular resolution for this energy range can be improved by up to two orders of magnitude. The experience from the previous mission XMM-Newton was a good help for the engineering of the mirrors and the idea of nested Wolter-I mirrors evolved from this mission. The main difference to XMM-Newton is the material of the mirrors. The Simbol-X mirror shells are built of platin and carbon to provide the requirements for a huge field of view and a high sensitivity to focus much higher photon energies. The multi-layers consists of alternating layers of high and low z (atomic number) material to be able to focus photons with energies three times higher as reached for single layers. The diameter of the mirrors has values from 26 cm up to 65 cm while the weight is reduced in comparison to XMM-Newton by reducing the thickness of the mirror layers. Additionally, a so-called spider wheel is present to provide the required stability of the mirrors on both sides.

The LED was developed at the semiconductor lab of the Max-Planck Institutes in Neuperlach and consists of a matrix of 128 x 128 pixels. Those pixels are partitioned in four quadrants which are integrated in a monolithical silicon waver. All quadrants have their own front-end-electronics (CAMEX - Charge Amplifier and MultiplEXer) and are read out simultaneously in a time of 128 μs. The detector type is a DePFET (DEpleted P-channel Field Effect Transistor).

Image: prototype of a waver made out of 128 x 128 pixels (MPI Semiconductor Laboratory)

The DEPFET consists of a huge (8 cm x 8 cm x 450 μm) and fully depleted block of silicon with a p-MOSFET, which is placed at the centre of the front side of each pixel. The task of the DEPFET is the storage, measurement and deletion of electrons produced by the incident radiation. Around the p-MOSFETs are driftrings to transport the charges to the read-out area. Due to the high flexibility of those rings, the size of the pixels can be adjusted according to the different requirements. The size variation is from 1cm x 1cm up to 50 μm x 50 μm without any effect on the energy resolution. The pixels used for the Simbol-X mission (Macro Pixel) have a size of 625 μm x 625 μm. 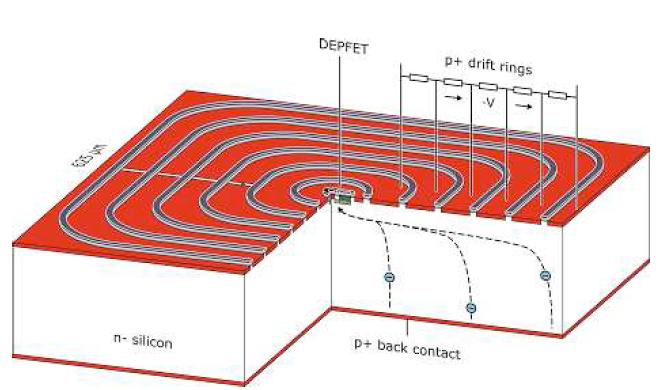 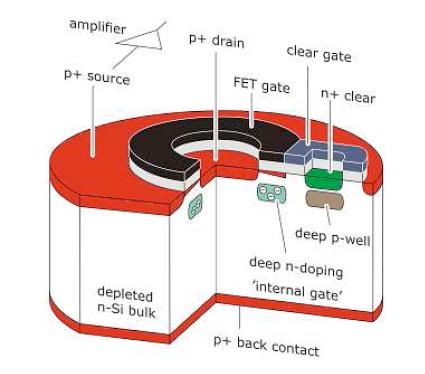 The read-out module of the MOSFET can collect up to 10^5 electrons. The signal of those electrons is measured by signal sampling as a voltage while connecting an external gate. After the measurement of a signal, the accumulated charges can be erased by feeding with a positive charge. Afterwards, the voltage at the source-connection can be measured with an empty internal gate which is called baseline sampling. The difference is equivalent to the number of collected electrons during the time of integration. A thin layer of aluminium is put on the entrance window in order to shield optical light. Just as well, the temperature around the waver has to be constant on -40°C. That's necessary to reduce thermal noise and to reach the intended energy resolution of < 150 eV FWHM at 5,9 keV. 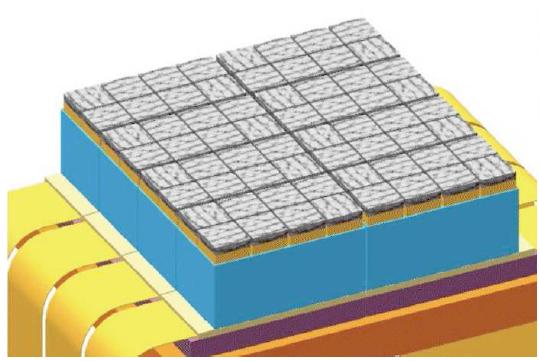 The HED consists of 64 high quality CdZnTe crystals, each with 16 x 16 pixels and a pixel size of 625 μm. Each crystal has its own read-out electronis. The energy range goes from 5 - 80 keV and is slightly overlapping with the one of the LED. The focal area is split in eight independent sectors.

The HED is a self-triggering detector and has no frame time contrary to the LED. As soon as the signal in a pixel reaches a certain value, an event package including time, energy and pixel information is generated.

Technical properties of the LED and HED: 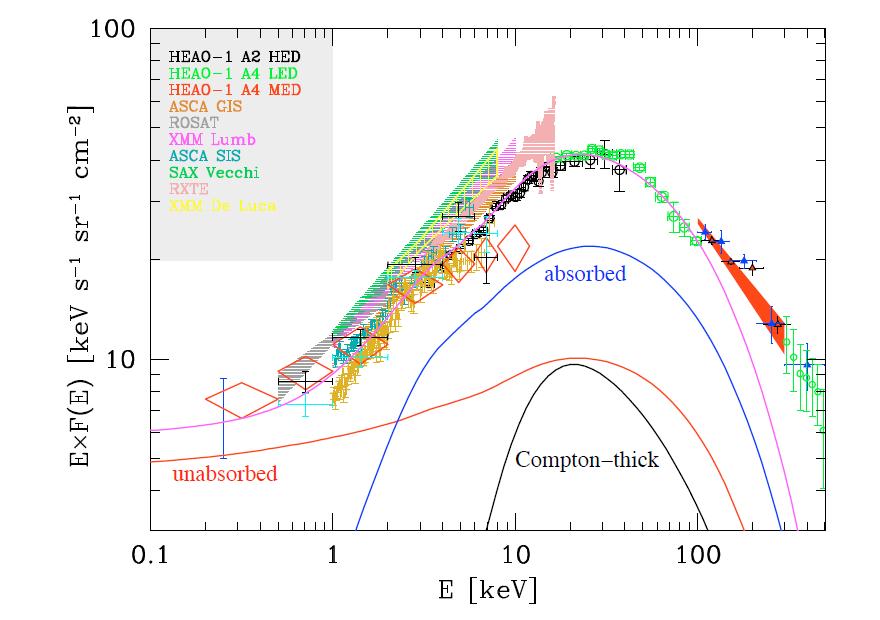 Contribution from Tübingen to Simbol-X:

--> Monte-Carlo simulations for the detector background

--> Construction of a Science Verification module (SVM): in a cooled vacuum laboratory both detectors shall be run together 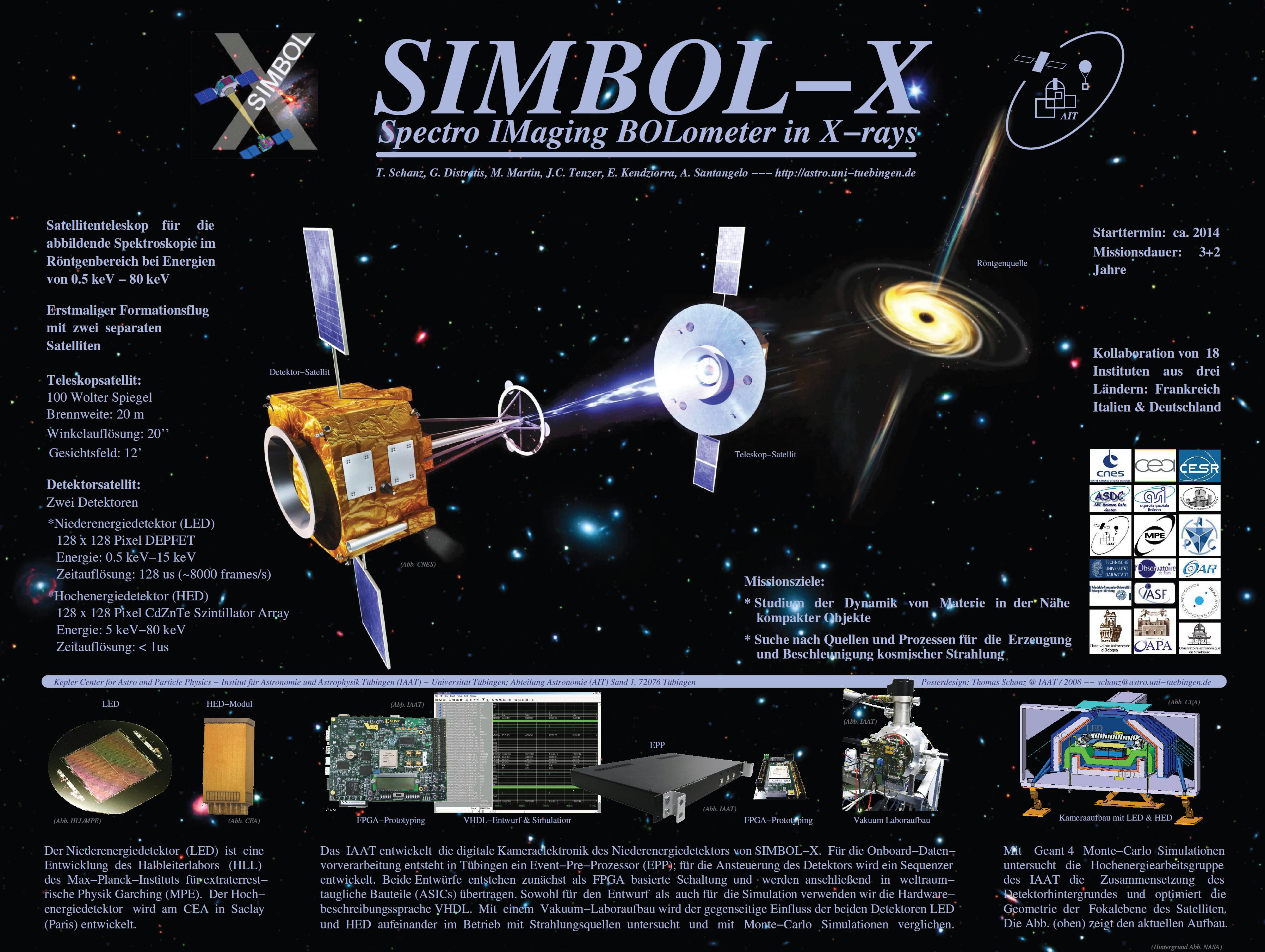 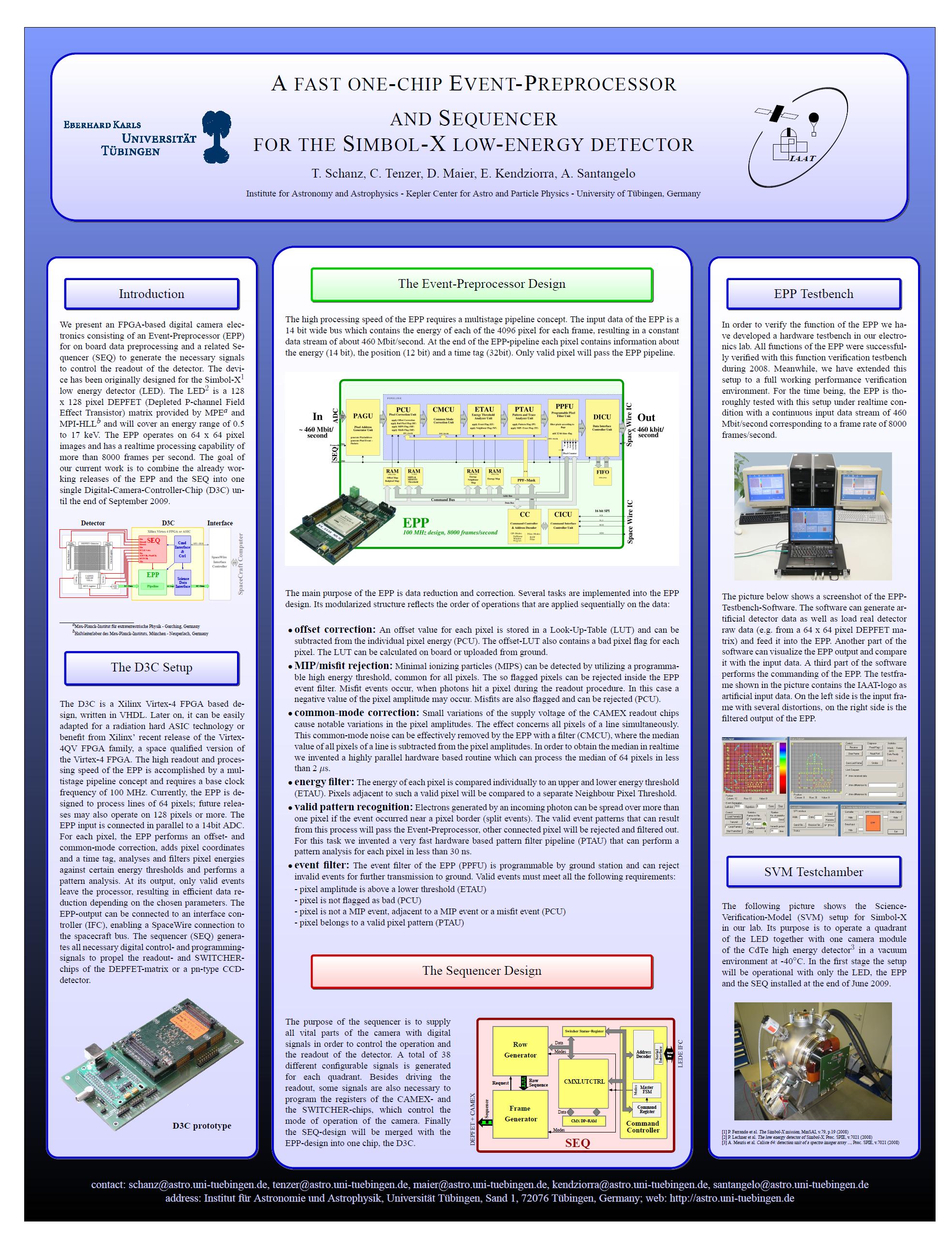