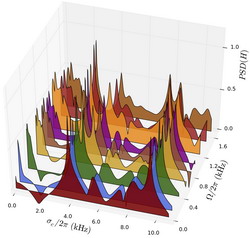 During the birth of a proto-neutron star or the merging of two older compact stars, violent non-radial oscillations may be excited, resulting in the emission of significant amounts of gravitational radiation. Detecting gravitational waves from these events will allow to probe the interior of neutron stars in the same way as for example seismolgy on Earth.

The original suggestion about gravitational wave asteroseismology has been supported by many complementary works which verified that this can be true, not only for typical neutron stars,but also for strange or superfluid stars. More recently, it has also been suggested that one may use asteroseismology to find the imprints of scalar or even vector components of gravity. All these studies have been performed for non-rotating relativistic stars. The treatment of rotation was always a problem in general relativity and thus the majority of the studies for the oscillation spectra of fast-rotating compact stars was done mainly in Newtonian theory which gives only qualitative answers.

In the last two years there was significant progress in the study of non-axisymmetric perturbations of fast rotating neutron stars. In addition it has been demonstrated that there is a way to derive empirical relations connecting the oscillation frequencies with the rotation of the stars. This study has been extended to g-modes and even more recently in the study of the oscillation spectra of fast and differentially rotating neutron stars. The next step for gravitational wave asteroseismology is to use additional information about the damping times to construct model-independent relations which allow for a robust determination of stellar key parameters.

In this study we demonstrate how one can do gravitational wave asteroseismology by using the frequencies and possibly the damping/growth times of the emitted waves from oscillating and fast rotating relativistic stars. This is possible by the empirical relations that we have derived and which connect the frequencies and the damping/growth times of the oscillation modes with the stellar characteristics, i.e. with the mass, radius and rotation rate. We show that for polytropic equations of state of varying stiffness one can create very robust formulae connecting the observable frequency and damping times with the quantities like rotation frequency, average density and/or compactness.

We also show by a thought experiment how one can use the empirical formulae in order to derive the stellar parameters. In a realistic situation when an f-mode will be excited, it will be possible to detect the signal at least from galactic sources if stable and at least from sources in the Virgo cluster if unstable. This will be possible with the sensitivity of the advanced Virgo and LIGO detectors and probably even more feasible with the next generation gravitational wave telescopes such as ET (Einstein Telescope).