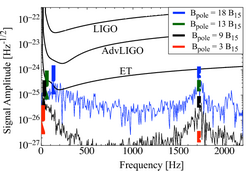 This study investigates simplified models for giant flares in magnetars using the HORIZON code. The basic setup is similar to our recent study on magnetic field stability (blog post, group page), but focuses on the emission of gravitational radiation by this process. Gravitational waves are an exciting new window into the universe, and a number of detectors are already taking data. In Germany, the "Sonderforschungsbereich/Transregio 7" of the DFG (website) is a special collaborative effort in detector instrument design and source modeling.

The traditional sources of gravitational wave detection are mergers of binary black holes or neutron stars. But another variant of neutron stars, those with a very strong magnetic field, so-called magnetars, have gained some attention as potential sources of gravitational radiation, particularly because they occasionally exhibit huge outbursts of electromagnetic radiation in the form of giant flares. It is expected that such outbursts may also excite oscillations in the star, particularly in its fundamental (f) quadrupole mode. Even a small excitation of such a mode may have the star ringing for many periods, a case in which the signal-to-noise ratio increases substantially.

But how much is the f-mode really excited in a giant flare?

Theoretical work so far has mostly used either equilibrium stellar models or back-of-the-envelope calculations to estimate the energy emitted in gravitational waves during a flare event. The predictions by this studies differ by many orders of magnitude. There is only one recent full numerical study, which is, however, concerned with an unrealistically strong magnetic field strength. The present work fills this gap by performing a numerical investigation of many models with a wide range of field strengths, down to typical magnetar values. While the model, a global restructuring of the core magnetic field, is simplified in the sense that it does not directly connect with magnetar observables, it should give a good idea how well such instabilities can actually couple into observable radiation.

Our main result is the above figure: Here, the strain amplitude of the gravitational radiation is shown over the frequency, for a source at 10 kpc distance. The black curves are noise levels for different detectors. Two cases are shown in full: the blue curve shows a magnetar models with (an unrealistically high) surface magnetic field strength of over 1016 G, whereas the black case shows a (still high) case with slightly less than 1016 G. The f-mode is clearly excited, but the signal-to-noise ratio is less than one for both of these sources, even if we assume the future Einstein Telescope (ET) to be operational.

This work will make the discussion of magnetars as possible gravitational wave sources substantially more specific. It also opens up additional routes to investigate magnetars as sources, e.g. by focusing on a band at lower frequencies, or by investigating different magnetic field topologies.