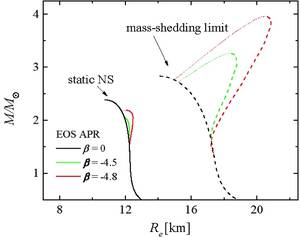 Neutron stars are valuable alternatives to black holes in tests of strong-field gravity, because they can probe (and possibly rule out) those theories that are practically indistinguishable from general relativity in the weak-field regime but can lead to serious deviations when strong fields are considered. There are both theoretical and observation motivations for modifying general relativity. For example, generalized theories of gravity are very often employed as alternative explanation of the accelerated expansion of the Universe and the dark matter phenomenon. On the other hand, theoretical justifications come from theories trying to unify all fundamental forces of nature and from the quantum field theory in curved spacetime.

Some astrophysical implications were considered, such as the effect of alternative theories of gravity on the quasiperiodic oscillations observed in the X-ray emission of accreting neutron stars. The results show that for rapid rotation the deviations from pure general relativity can be large thus leading to potentially observable effects.