The International X-ray Observatory (IXO) was a satellite project collaboration of ESA, NASA, and JAXA, born from the missions of XEUS (ESA) and Constellation-X (NASA). One of the most remarkable attributes was the combination of a Wolter-Optics with a large collection area, an expandable optical bench and six different instruments mounted on a movable platform and brought into the focal plane, depending on the requirements of each observation. The effective collection area of the mirror module would have been an order of magnitude larger than on the previously running X-ray missions. Combined with a high spectral and timing resolution of some of the instruments, it should have given giant possibilities for new discoveries. Since 2004, a test environment for the detector prototype was operated and readout electronics were developed and tested at IAAT (initially, for XEUS). In 2007, three large ('L-class') missions, namely, EJSM-Laplace, IXO, and LISA, were selected for an Assessment Phase study following a Call for Missions for the first L-class mission opportunity in ESA's Cosmic Vision 2015-2025 plan. In 2011, ESA decided on a new way forward for these L-class mission candidates to take account of developments with ESA's international partners. During the reformulation exercise, IXO became Athena.

IXO was a next-generation facility designed to address some of the most fundamental questions in contemporary astrophysics and cosmology. Building on the accumulated knowledge acquired by the current (and previous) X-ray facilites, IXO would address these primary goals:

IXO will provide the advances in X-ray imaging, timing, and spectroscopy needed to address these goals.

In order to fulfill the IXO science requirements, the following baseline instrument complement had been adopted:

The baseline instrument payload is used during mission to ensure that the scientific requirements of the mission can be achieved. An Announcement of Opportunity would have been issued at a later date, inviting the community to propose specific instruments for the observatory. 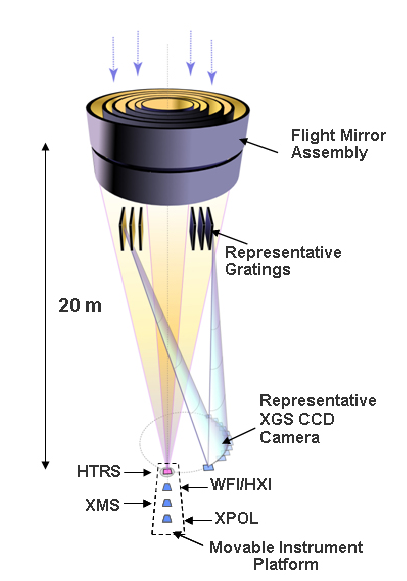 To collect as many photons as possible, IXO will have as large a diameter mirror assembly as can be accommodated within the constraints. Instead of the near-normal incidence optics used in telescopes that operate in the infrared through ultraviolet wavelength ranges, the IXO mirror assembly will consist of optics elements that are almost edge-on to the incoming X-rays. The incoming X-rays must be reflected at small angles of incidence in order not to be absorbed. To be focused correctly, the X-rays must complete a double reflection, grazing off both primary and secondary mirrors. The desired effective area at the energy levels of interest dictates the optical design. In addition to the primary and secondary mirror sets, the mirror assembly will be equipped with a straylight baffle to block those incoming X-rays which would reach the mirror focus after only a single reflection. The height of the baffle is dependent on the cone angle of the mirror shells.

Two new technologies are being investigated: mirror shell segments manufactured from slumped glass (NASA) and silicon pore optics (ESA). The IXO spacecraft is being designed to accommodate both types of optics and a choice will be made at the appropriate time. 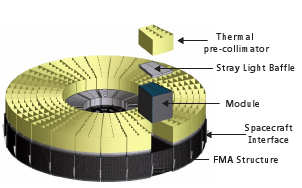 In slumped glass optics, the mirror segments are shaped by placing glass on a shaped, polished mandrel and heating it until it slumps to take up the shape of the mandrel. The manufacturing technology limits the circumferential span of the sections to approximately 360 mm, so each concentric shell must be made up from a number of segments sized in accordance to this limitation.

In the design currently under consideration, there are 360 concentric mirror shells. The inner shell has a diameter of about 750 mm and the outer shell, 3.2 meters.

Each shell is 0.4 mm thick and made up of 12 or 24 segments, giving a combined total of around 14,000 segments for the primary and secondary mirrors. The shells are about 200 mm long in the direction of the telescope axis and a maximum of 360 mm in the circumferential direction-roughly the size of a sheet of A4 paper. The shell spacing varies from 2-5 mm and the total mass of the shells will be around 800 kg.

Silicon pore optics employ a standard semiconductor wafer technology process to produce rectangular plates that have thin ribs on one side, and thin membranes between the ribs. The plates are bent into the required shape, and several plates are stacked to obtain a stiff pore structure. The stacks are then mounted into a 'tandem' structure, creating an approximation to the Wolter-I geometry. Many pairs of stacks can then be assembled in an optical structure to form an X-ray mirror of the required dimensions.

The predicted mirror module mass density is approximately 200 kg m-2, a factor of 10 better than older technologies. Silicon pore optics has been in active development for six years and is currently performing with a resolution of 15 arcseconds HPD (similar to the XMM-Newton performance) with individual pores already at 5 arcseconds (the IXO requirement).

The purpose of the XMS is to provide spectra with a resolving power E/δE of several hundred in the energy range 0.2-6 keV, simultaneously with images of a modest (2 arcmin) field of view. This is observed by time resolved photon counting.

The IXO Wide Field Imager (WFI) is an imaging X-ray spectrometer with a large field of view (18x18 arcmin2). The purpose of the WFI is to provide images in the energy band 0.1-15 keV simultaneously with spectrally and time resolved photon counting. The Hard X-ray Imager (HXI) is mounted beneath the WFI. It will extend the energy coverage up to 40 keV and enable simultaneous observations with both instruments. HXI should have an energy resolution better than 1 keV (FWHM) at 40 keV and cover a FOV of 12x12 arcmin2. 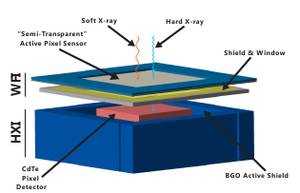 A consequence of the co-location of the two instruments is that they share an optical axis, and the same baffle structure, with heavy metal sheets added for hard X-ray coverage. A thermal shield will be required between the WFI and HXI since they operate at different temperatures. The HXI cooling design, mechanical structure and electrical interfaces are all independent from the WFI, so that both instruments can be operated separately.

The HXI is based on proven technology-a similar instrument has been developed for the ASTRO-H spacecraft. One aspect that will require investigation is the design of an optimum engineering solution for mounting the HXI behind the WFI.

The purpose of the HTRS is to provide spectra with resolving power E/δE of 5--50 in the energy range of 0.5 to 10keV, at very high time resolution (10μs) and with very high count rate capability (up to 2M counts per second).

The HTRS is based around an array of silicon drift diodes (SDD). The SDD is a completely depleted volume of silicon in which an arrangement of increasingly negatively biased rings drive the electrons generated by the impact of ionizing radiation toward a small readout node in the center of the device. The time needed for electrons to drift is much less than 1μs.

The HTRS will rely on an array of 37 hexagonal SDD pixels patterned on a single substrate. The sensor will be placed slightly out-of-focus in order to spread the photons as evenly as possible over all pixels and thus increase the overall count rate capability of the instrument. As such, the instrument will not be truly "imaging".

The purpose of the XPOL is to provide, in the energy range 2-10 keV, polarization measurements simultaneously with angular measurement (5 arcsec), spectral measurements (E/δE of ∼5@6 keV) and timing at a level of a few μs.

The XPOL derives from a Gas Pixel Detector where the multi-anode read out is fully pixelated. It is based on a gas cell with a thin entrance window and a detection/drift gap where the X-ray photon is absorbed with the ejection of a photoelectron that produces an ionization pattern in the gas (track). The image of the track is analyzed to reconstruct the point of impact and the original direction of the photoelectron. The reconstructed point of impact instead of the charge centroid give this detector an imaging resolution down to 150 μm FWHM, largely oversampling the PSF. An additionaly blurring of the order of 2 mm (diameter) should be accounted for due to the absorption of photons from an inclined beam at different heights in the gas. The linear polarization is determined from the angular distribution of the photoelectron tracks.

The system has the capability to auto-trigger and only data included in a window around the pixels that triggered are fetched for A/D conversion. Therefore, notwithstanding the large number of pixels, only sub-frames of 400 to 600 pixels, completely including the track, are extracted in real time for each event.

The XGS will be a dispersive spectrometer with an effective area of more than 1000 cm2 from 0.3 to 1 keV. It will have a spectral resolving power of about 1250 over the full band. Two grating arrays will be mounted behind the optics. Both arrays will use the same CCD readout.

Two grating technologies are under investigation: a 'critical angle transmission' (CAT)grating, and an off-plane reflection grating.

The CCD detector array, comprising of 10 CCDs in a 780 mm long array, would be read out at 10 Hz. Back-illuminated CCDs with high QE below 1 keV and thin optical blocking filters are foreseen. Energy resolution of 160 eV is required to separate the spatially overlapping spectral orders.

IXO would have been launched on either an Ariane 5 ECA or Atlas V 551, with direct injection towards a large-amplitude halo orbit around the second Lagrange point (L2) of the Sun-Earth system. The main advantages to this orbit are a very stable thermal environment and minimal shadowing by the Earth or Moon. The journey to L2 will take just over 3.5 months. In the selected L2 orbit, it is possible to always have the same side of the spacecraft nominally pointing towards the Sun. However, to increase the instantaneous coverage of IXO, the spacecraft has been designed for a pitch angle of up to 20 degrees. Therefore, at any time the IXO telescope can access a 40-degree wedge of sky at all ecliptic latitudes. In addition, the spacecraft has been designed to enable a roll angle of up to ±10 degrees, so that the observation conditions for the X-ray Grating Spectrometer (XGS) instrument can be optimized with respect to avoidance of off-axis sources.

In the ESA concept, routine communictaions between IXO and Earth could be via a single ground station, nominally the 35-meter antenna at the New Norcia station in Western Australia. Communications with the spacecraft will be possible for about three hours per day, with a telemetry data rate of 8.7 Mbps allowing 90 Gb of data transfer per day. The spacecraft's mass memory will be sized to store science data from two days of observations at the highest data rate in order to be able to cope with a failed telemetry downlink sequence.

The IAAT was involved in IXO with the Wide Field Imager and the High Time Resolution Spectrometer. In parallel, many Monte-Carlo Simulations for the detector background and the photonrate were performed, which were verified in Laboratory measurements at the MPI-Semiconductorlab with their prototype detector. The IXO performance on the observation of the QPOs and broad Fe-lines of LMXRBs was also simulated.