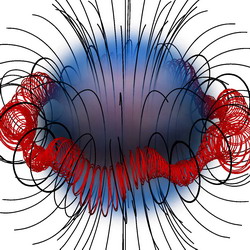 Neutron stars harbour the strongest known magnetic fields in nature - up to 1015 Gauss in the most extreme, ultra-magnetised neutron stars known as magnetars. These exotic objects exhibit high energy emissions with sporadic bursting phenomena. On rare occasions, powerful flares have been observed in some magnetars, emissions that are believed to be powered by the energy of the magnetic field itself.

We are modelling the interior magnetohydrodynamics (MHD) of these exotic objects utilising the general relativistic THOR code and her sister GPU code HORIZON. Our first work [1] studied instabilities inherent to purely poloidal magnetic fields. A movie of our fiducial simulation can be viewed here:

The beginning frame of the simulation shows the poloidal structure of the magnetic field. The red field lines are seeded near the neutral line of the field (which is the point on the equatorial plane where the field goes to zero). The black field lines are seeded on the equatorial plane interior to the neutral line. The volume rendering is a surface of constant density located approximately 50 % inside the radius of the star. We note that this simulation has an Alfven crossing time of 5 ms (this is the characteristic time of the magnetic field).

More details of this work are presented in our recent preprint journal article referenced below.