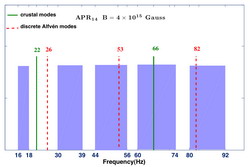 In the last few years, a great attention was devoted to the study of magnetars, neutron stars with a strong magnetic field. In particular two types of sources have been classified as magnetars: Soft Gamma Repeaters (SGRs) and Anomalous X-ray Pulsars (AXPs). Those two objects are observationally very similar: they are slowly rotating X-ray pulsars (with a period around 2-12 sec) and their magnetic field, as inferred from the classical magnetic dipole spin-down formula, is around 1014-1015 Gauss.

SGRs undergo periods of activity during which recurrent bursts with sub-second duration and peak luminosities of 1038-1041 erg/s are observed. SGRs also show, on rare occasions, extreme events known as giant ﬂares. These are characterized by an initial spike of duration comparable to that of recurrent bursts, but many orders of magnitude higher luminosity. Only three giant ﬂares have so far been observed in over 30 yrs of monitoring and only in two of them, fast Quasi Periodic Oscillations (QPOs) have been discovered in the X-ray ﬂux of the decaying tail. QPOs with diﬀerent frequencies were detected in SGR 1806-20, some of which were active simultaneously and displayed highly signiﬁcant QPO signals. Also the 1998 giant ﬂare of another magnetar, SGR 1900+14, revealed a few QPOs in the tail.

Using our results, we can put some very preliminary results on the equation of state of magnetars.