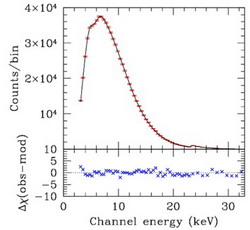 Unstable burning of the matter accreted at low rates by a neutron star in a low-mass X-ray binary manifests itself as a sudden increase in X-ray flux with a slower decay. Such thermonuclear X-ray bursts that appear to reach the Eddington luminosity have long been used to estimate neutron star masses and radii. These estimates assumed that burst spectra are accurately described by the model atmosphere spectra developed over the last three decades. Such model spectra, however, had hardly been compared to actual data and never with enough counts to distinguish between qualitatively different models.

We challenged the above assumption and found the most precise available data set around the peak of the superburst from 4U 1820-30 which contains up to 200,000 counts per 16 seconds. We found that the spectra predicted by previously published model atmospheres are strongly inconsistent with these high-precision measurements. This suggests caution in inferences made using these model spectra. In contrast, a simple Bose-Einstein spectrum is fully consistent with the data, as are recently published model atmosphere spectra by Suleimanov et al. (2011).

Joint fits of long stretches of data to the latter may constrain the equation of state of the neutron star once these models have been made more accurate. This is because the model spectra depend directly on the surface gravity and surface redshift. A spectroscopic determination of the two will thus uniquely determine the mass and radius of the neutron star without any assumptions about the degree of coverage of the neutron star surface by the burning region nor about the distance to the source.