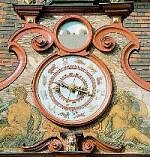 Mathematics and physics started with astronomy in Tübingen. Already in 1507, i.e. 30 years after the founding of the university, duke Ulrich summoned pastor Johannes Stöffler (1452-1531) to the artists faculty as a professor for "Mathesis". At this time mathematics and astronomy were closely linked in Tübingen. Stoeffler was primarily know through the issuance of its Astronomical Ephemeris, in which he had tabulated the course of planets to 20 years in advance.

He also constructed the Astronomical Clock (Foto: Herbert Schmitt) at the Tübingen town hall. He was followed by representatives of astronomy such as Michael Mästlin (1546-1601), the teacher of Johannes Kepler, and Wilhelm Schickard (1592-1635), who developed a first computing machine for his astronomical calculations. Schickard had a professorship in Tübingen for Hebrew and Astronomy. Johannes Kepler (1571-1630), under whose name the faculty organises an academic event every year, was only as a student in Tübingen. Disputes over theological doctrines prevented Kepler to be appointed to a professorship in Tübingen.

In 1863 the first Faculty of Science at a university in Germany was founded in Tübingen. This comprised in addition to the chairs of mathematics and physics those for geology, chemistry, botany and zoology. In the 19th Century it is worth mentioning, above all, Karl Ferdinand Braun (1850-1918), who worked in the field of electromagnetic oscillations for 10 years, starting in 1885. He developed the cathode-ray oscilloscope - the Braun tube - the starting point for the development of television and computer monitors. His contributions to the development of antenna technology enabled powerful radio and TV stations.

In the first half of the 20th Century physics in Tübingen was characterized especially by the nuclear physics. The names of Friedrich Paschen (1865-1947), Ernst Back (1936-1948) and Walter Gerlach are associated with basic experiments on atomic physics and quantum mechanics. Hans Geiger (1882-1945) worked on the fields of radioactivity and nuclear physics. With his name primarily the Geiger counter for detecting ionizing particles is associated.

A more detailed description can be found in an essay by Matthias Schramm: The History of Physics at the University of Tübingen