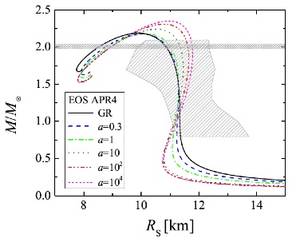 The f (R) theories of gravity are one of the most popular alternative explanations of dark energy. Naturally they were mainly investigated in a cosmological context. Every theory of gravity has to be able to pass various astrophysical tests as well. The neutron stars are one of the primary candidates to test the strong field regime of gravity due to the large amount of observational data. That is why studying neutron stars in f (R) theories and confronting them against the observations, is an inseparable part of the attempts to find a generalized theory of gravity that can naturally incorporate the dark energy phenomena.

Compact stars in f (R) theories were intensively studied in the past few years. Due to the complexity of the field equations though, the problem was considered primarily using a perturbative approach. Our goal was to drop this approximation and consider the full nonlinear set of equations. The results show that the perturbative approach is misleading. We have investigated the properties of the neutron star modes, their dynamics and astrophysical implications in detail, both in the static and the rotating case, and we have identified the potentially observable effects.