Palaeoanthropologist Radu Iovita and medical researcher Surjo R. Soekadar receive 1.5 m euros for their research on the deep prehistory of the Silk Road and the next generation of brain-computer interfaces

Tübingen research has attracted a further two Starting Grants from the European Research Council. Palaeoanthropologist Dr. Radu Iovita of the Institute for Early Prehistory and Quaternary Ecology undertakes large-scale survey and new excavations in Kazakhstan in his project “A Silk Road in the Palaeolithic: Reconstructing Late Pleistocene Hominin Dispersals and Adaptations in Central Asia (PALAEOSILKROAD)”. This will shed light on the correlation of settlement and climate in central Asia during the Ice Ages. Medical researcher and psychiatrist Dr. Surjo R. Soekadar (Applied Neurotechnology, Department of Psychiatry and Psychotherapy) will pursue the project “Building Next-Generation Brain/Neural-Machine Interfaces for Restoration of Brain Functions (NGBMI)” fostering the development of brain-computer interfaces for the treatment of neurological and psychiatric disorders. Each of the researchers will receive 1.5 million euros over five years to pursue their projects.

The European Research Council (ERC) disburses more than half a billion euros annually to outstanding junior researchers. Grants are awarded on the basis of excellent research and innovative potential.

In the “PALAEOSILKROAD” project, Radu Iovita and his team are looking for new prehistoric archaeological sites in the mountain foothills along the Silk Road in Kazakhstan. Goods were traded along this ancient route between East Asia and the Middle East thousands of years ago; this led to a cultural and genetic exchange. The groundwork for this appears to have been laid as early as in the last Ice Age, when three different species of human co-inhabited central Asia and Siberia. The researchers hope to discover how humans survived in the region during the different climatic cycles of the Ice Age, and what role expanding glaciers and deserts played in splitting or bringing together different populations. “This could give us new knowledge of how humans spread across the earth, and how they dealt with environmental challenges,” Iovita says. “Ultimately, we are hoping to understand how we, Homo sapiens, managed to become the only surviving member of our genus.” www.palaeosilkroad.eu

Radu Iovita studied Anthropology at Harvard and Archaeology at Cambridge (UK); he completed his doctorate at the University of Pennsylvania. He has conducted research at the Römisch-Germanis 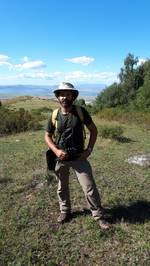 ches Zentralmuseum in Neuwied, at the University of Mainz, and at the Max Planck Institute for Evolutionary Anthropology in Leipzig. Parallel to working in Tübingen, Iovita is assistant professor of Anthropology at New York University.

In his project “Building Next-Generation Brain/Neural-Machine Interfaces for Restoration of Brain Functions (NGBMI)” Surjo R. Soekadar is merging real-time classification of brain states with closed-loop brain stimulation to improve specific brain functions that are impaired in neurological or psychiatric disorders, such as depression, obsessive-compulsive and anxiety disorders or dementia. Current brain-computer interfaces are able to “read” electrical, magnetic, or metabolic brain activity and translate it into a control signal for external machines such as robots, computers, or prostheses. Soekadar proved in a recent study that quadriplegics who cannot move their fingers at all can eat and drink independently using a brain-controlled exoskeletal hand prosthesis. He also showed that regular use of such a system can facilitate neuroplasticity boosting recovery following a stroke or damage to the spinal cord. In the ERC-backed research project, Soekadar aims to further develop this technology by implementing individualized electric or magnetic brain stimulation to establish a new form of bi-directional (“read and write”) brain-computer interaction. 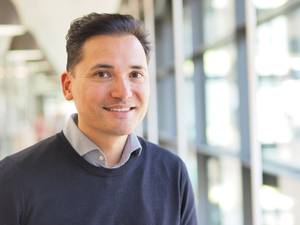 Surjo Soekadar studied at the Universities of Mainz, Heidelberg, and Baltimore. He completed his doctorate in neural plasticity and phantom pain at the Central Institute of Mental Health in Mannheim. He continued this research in Tübingen under Niels Birbaumer. Following a three-year sabbatical at the National Institutes of Health (NIH, USA), he now leads the Applied Neurotechnology working group at the Department of Psychiatry and Psychotherapy and at the Institute for Medical Psychology and Behavioral Neurobiology at the University of Tübingen. (Photo: Friedhelm Albrecht / Tübingen University)